India mourns one of its oldest elephants, Indira 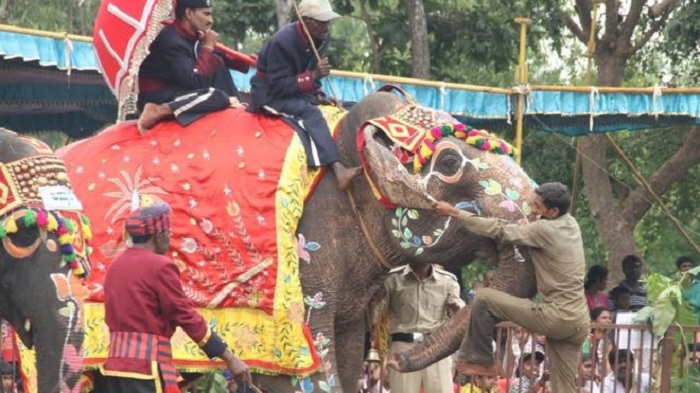 One of the world`s oldest elephants, Indira, has died in her eighties in southern India, forest officials say.
She had been unwell and stopped eating earlier this month.

A vet at the elephant camp in Karnataka state that cared for her put her age at "between 85 and 90". Elephants normally survive to about 70.

Records show the oldest elephant ever to have lived in captivity was called Lin Wang. He died in Taipei zoo in 2003 at an estimated age of 86.
India has another elephant living in the state of Kerala who is thought to be a similar age.

Indira was brought to Karnataka`s Sakrebailu camp, a rehabilitation and training centre for ailing and captive elephants, nearly 50 years ago.

Her diet which included "a lot of greens" may have been the secret to her long life.

But she stopped eating in early January and became weak, camp veterinarian Dr Vinay told BBC Hindi. Indira died on Monday due to an "acute inflammation of the peritoneum" and was buried after a post-mortem.

"She must have been between 85 to 90 years. Normally, around the age of 60-65 years, an elephant loses its molars," Dr Vinay said.
"Indira was on a soft food diet for almost two decades. About 15 years ago, she lost sight in one eye and about a month ago, she developed a cataract in the other eye."

Indira was caught in Kakkanakote forest in 1968 and was used to help capture and tame wild elephants. Dr Vinay described her as "highly disciplined and very docile".

As well as greens, she was fed a diet of "paddy stock, raw rice, jaggery [cane sugar] and salt".

Forest officials say her diet may have helped her live such a long life.

"It is certainly a subject matter for study. A longer life is entirely dependent on the feed elephants are given, particularly after the age of 60 years," senior forest official Dr UV Singh told BBC Hindi.

"Any elephant on a controlled and balanced diet with all the required ingredients is known to live long."