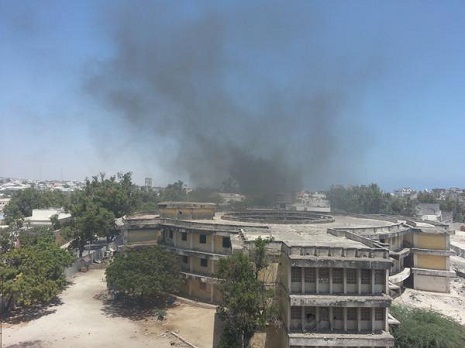 Unidentified attackers have stormed a hotel in the center of the Somali capital Mogadishu with high-ranking officials inside, after a car bomb had exploded outside the building.
A bomb blast has hit a popular hotel in the center of Mogadishu near the presidential palace. After a huge explosion unidentified gunmen started to storm the building where senior governmental officials and lawmakers were inside.

"There were ministers and legislators inside the hotel. I have seen many people with injuries, including a lawmaker," Nur Mohamed, a police major told reported.
At least 8 people confirmed dead. Eyewitnesses say MPs are among those killed.

For the past seven years, the Mogadishu government has been under assault by the al-Shabaab Islamist group, which wants to topple the UN-backed government and create an Islamic state on the controlled territories. The ongoing political crisis in Somalia stems from 1991, when the clan-based opposition groups overthrew the Revolutionary Socialist Party.

Since then, the country has been without an effective government, with the internationally-recognized federal authorities controlling only the capital city of Mogadishu and a part of central Somalia. The other areas in the country are self-governing or controlled by unrecognized state formations.