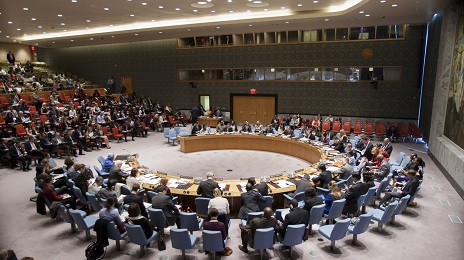 The high-level session will focus on the maintenance of international peace and security and historical lessons and will be held at the initiative of China
The UN Security Council is due on Monday to hold open debates dedicated to the 70th anniversary of the Victory over fascism and the founding of the organisation aimed at saving mankind from war.

The debates will be chaired by China’s Foreign Minister Wang Yi. UN Secretary-General Ban Ki-moon will deliver a speech first.

The high-level session will focus on the maintenance of international peace and security and historical lessons and will be held at the initiative of China, which has assumed the rotating presidency of the UN Security Council for February.

The meeting will be attended by both 15 member-states of the Security Council and other UN countries. More than 60 people will make speeches. Ukrainian Foreign Minister Pavel Klimkin, who is due to arrive in New York on Monday, could also address the Council’s session.

A diplomatic source told, UN Security Council member-states are not expected to adopt any documents following the debates.

Traditionally, a number on bilateral meetings will be held on the sidelines of the ministerial debates.