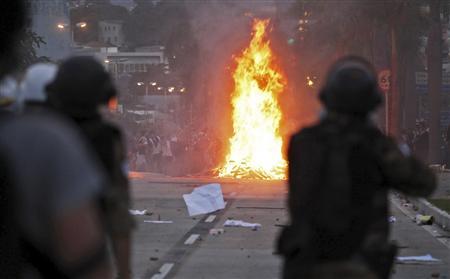 As many as 200,000 demonstrators marched through the streets of Brazil`s biggest cities on Monday in a swelling wave of protest tapping into widespread anger at poor public services, police violence and government corruption.
The marches, organized mostly through snowballing social media campaigns, blocked streets and halted traffic in more than a half-dozen cities, including Sao Paulo, Rio de Janeiro, Belo Horizonte and Brasilia, where demonstrators climbed onto the roof of Brazil`s Congress building and then stormed it.

Monday`s demonstrations were the latest in a flurry of protests in the past two weeks that have added to growing unease over Brazil`s sluggisheconomy, high inflation and a spurt in violent crime.

While most of the protests unfolded as a festive display of dissent, some demonstrators in Rio threw rocks at police, set fire to a parked car and vandalized the state assembly building. Vandals also destroyed property in the southern city of Porto Alegre.

Around the country, protesters waved Brazilian flags, dancing and chanting slogans such as "The people have awakened" and "Pardon the inconvenience, Brazil is changing."

The epicenter of Monday`s march shifted from Sao Paulo, where some 65,000 people took to the streets late in the afternoon, to Rio. There, as protesters gathered throughout the evening, crowds ballooned to 100,000 people, local police said. At least 20,000 more gathered in Belo Horizonte.

The demonstrations are the first time that Brazilians, since a recent decade of steady economic growth, are collectively questioning the status quo.

The protests have gathered pace as Brazil is hosting the Confederation`s Cup, a dry run for next year`s World Cup soccer championship. The government hopes these events, along with the 2016 Summer Olympics, will showcase Brazil as an emerging power on the global stage.

Brazil also is gearing up to welcome more than 2 million visitors in July as Pope Francis makes his first foreign trip for a gathering of Catholic youth in Rio.

Contrasting the billions in taxpayer money spent on new stadiums with the shoddy state of Brazil`s public services, protesters are using the Confederation`s Cup as a counterpoint to amplify their concerns. The tournament got off to shaky start this weekend when police clashed with demonstrators outside stadiums at the opening matches in Brasilia and Rio.

"For many years the government has been feeding corruption. People are demonstrating against the system," said Graciela Caçador, a 28-year-old saleswoman protesting in Sao Paulo. "They spent billions of dollars building stadiums and nothing on education and health."

More protests are being organized for the coming days. It is unclear what specific response from authorities - such as a reduction in the hike of transport fares - would lead the loose collection of organizers across Brazil to consider stopping them.

For President Dilma Rousseff, the demonstrations come at a delicate time, as price increases and lackluster growth begin to loom over an expected run for re-election next year.

Polls show Rousseff still is widely popular, especially among poor and working-class voters, but her approval ratings began to slip in recent weeks for the first time since taking office in 2011. Rousseff was booed at Saturday`s Confederations Cup opener as protesters gathered outside.

Through a spokeswoman, Rousseff called the protests "legitimate" and said peaceful demonstrations are "part of democracy." The president, a leftist guerrilla as a young woman, also said that it was "befitting of youth to protest."

Some were baffled by the protests in a country where unemployment remains near record lows, even after more than two years of tepid economic growth.

"What are they going to do - march every day?" asked Cristina, a 43-year-old cashier, who declined to give her surname, peeking out at the demonstration from behind the curtain of a closed Sao Paulo butcher shop. She said corruption and other age-old ills in Brazil are unlikely to change soon.

The marches began this month with an isolated protest in Sao Paulo against a small increase in bus and subway fares. The demonstrations initially drew the scorn of many middle-class Brazilians after protesters vandalized storefronts, subway stations and buses on one of the city`s main avenues.

The movement quickly gained support and spread to other cities as police used heavy-handed tactics to quell the demonstrations. The biggest crackdown happened on Thursday in Sao Paulo when police fired rubber bullets and tear gas in clashes that injured more than 100 people, including 15 journalists, some of whom said they were deliberately targeted.

Other common grievances at Monday`s marches included corruption and the inadequate and overcrowded public transportation networks that Brazilians cope with daily.

The harsh police reaction to last week`s protests touched a nerve in Brazil, which endured two decades of political repression under a military dictatorship that ended in 1985. It also added to doubts about whether Brazil`s police forces would be ready for next year`s World Cup.

The uproar following last week`s crackdown prompted Sao Paulo state Governor Geraldo Alckmin, who first described the protesters as "troublemakers" and "vandals," to order police to allow Monday`s march to proceed and not to use rubber bullets.

The protests are shaping up as a major political challenge for Alckmin, a former presidential candidate, and Sao Paulo`s new mayor, Fernando Haddad, a rising star in the left-leaning Workers` Party that has governed Brazil for the past decade. Haddad invited protest leaders to meet Tuesday morning, but has so far balked at talk of a bus fare reduction.

The resonance of the demonstrations underscores what economists say will be a challenge for Rousseff and other Brazilian leaders in the years ahead: providing public services to meet the demands of the growing middle class.

"Voters are likely to be increasingly disgruntled on a range of public services in a lower growth environment," Christopher Garman, a political analyst at the Eurasia Group, wrote in a report.