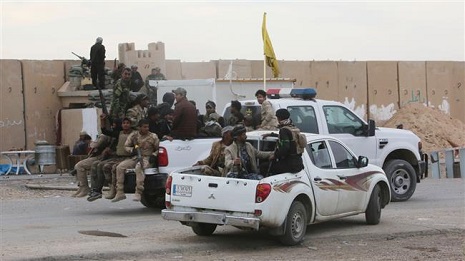 Government forces in Iraq have managed to wrest control of a number of villages in the northern province of Kirkuk as they continue to gain more ground in the battle against the ISIL Takfiri militants.

Qadir further said that scores of ISIL militants were killed during the operation.

A security source, speaking on condition of anonymity, also said Iraqi soldiers have launched an operation to recapture the northern village of Basheer, located 15 kilometers (nine miles) south of the city of Kirkuk.

Iraqi forces, backed by volunteer fighters, keep advancing in the northern strategic city of Tikrit, a major stronghold of ISIL militants and located 140 kilometers (86 miles) northwest of Baghdad. The operation has so far liberated major parts of the city, which is the hometown of slain Iraqi dictator Saddam Hussein.

The operation includes a combined force of more than 30,000 fighters both from the Iraqi armed forces and volunteers, known as Popular Mobilization units. It is the largest operation launched by the government to date and many see it as a prelude to recapturing the northern city of Mosul.

The US-led international coalition against ISIL has no role to play in the operation to retake Tikrit, although Iraqi officials have announced they would use the support of coalition airstrikes in the battle for Mosul.

ISIL started its campaign of terror in Iraq in early June 2014. The heavily armed terrorists took control of Mosul before sweeping through parts of the country’s Sunni Arab heartland.