US Secretaries of Energy and State to take part in N talks with Iran Mar.15 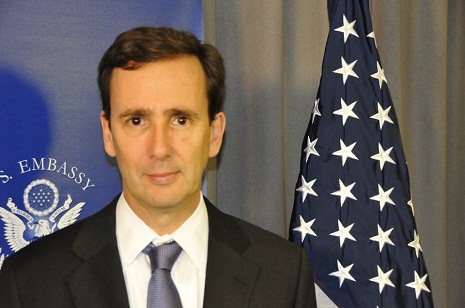 Under Secretary of State for Political Affairs Wendy Sherman and the U.S. negotiating team will travel on March 15 to Lausanne, Switzerland, where they will join Secretary of State John Kerry to meet with Iranian officials.
“These bilateral consultations take place in the context of the P5+1 nuclear negotiations with Iran and thus include Deputy Secretary General for the EU`s External Action Service Helga Schmid and her team,” the U.S. State Department’s Persian Language Spokesperson Alan Eyre told Trend March 13.

He said that “at the request of Secretary John Kerry, Secretary of Energy Ernest Moniz will travel to Lausanne to join in the negotiations”.

Iran and the P5+1 are preparing to reach a political agreement by the end of March and attempting to achieve a comprehensive nuclear deal by late June.

Wendy Sherman, Under Secretary of State for Political Affairs

James Timbie, Senior Advisor to the Under Secretary of State for Arms Control and International Security

Mark Appleton, Special Advisor to the Secretary, Department of Energy

Julia Jacoby, Special Assistant to Under Secretary of State Sherman