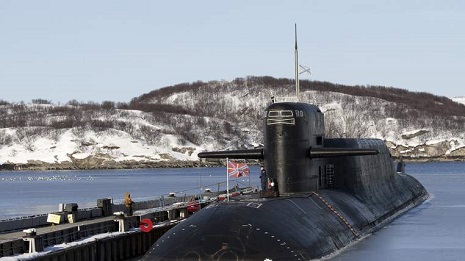 Putin Orders Huge Arctic Military Exercise
The Russian president sends 40,000 troops, 50 ships and 110 aircraft for snap drills in the resource-rich region.
Russian president Vladimir Putin has launched massive military manoeuvres involving 40,000 servicemen in the Arctic, in an effort to expand its presence in the polar region.

Defence Minister Sergei Shoigu, who is overseeing an expensive modernisation of the armed forces, said Russia faced new threats to its security which obliged it to boost its military strength and capabilities.

In a statement carried by Russian news agencies, he said that more than 50 surface ships and submarines and 110 aircraft will be used in the snap exercises.

He said Mr Putin has ordered the manoeuvres in order to check the readiness of Russia`s Northern Fleet.

The announcement came as speculation continued to swirl about the president`s whereabouts.
Mr Putin had not been seen in public since a meeting with Italian prime minister Matteo Renzi in Moscow on 5 March, prompting rumours that he was ill or distracted by the birth of a child with his girlfriend.

But on Monday he made an appearance with the Kyrgyz president.

Moscow has boosted its ambitions in the resource-rich Arctic region, where it shares a border with NATO member Norway.

The exercise comes amid Russia-West tensions over Ukraine. The United States is planning to conduct joint exercises with forces from Estonia, Latvia and Lithuania later this month.

The West and Kiev accuse Russia of supplying arms and soldiers to support pro-Russian separatists in eastern Ukraine who are fighting government troops.

NATO made new allegations last week that Russia was arming the separatists in east Ukraine, where more than 6,000 people have been killed in nearly a year of fighting.

It has also emerged that Mr Putin was "ready" to place Russia`s nuclear forces on alert as he sought to annex the Crimean peninsula last year.

Speaking during a documentary aired on Russian state TV, the president said he was prepared to face "the worst possible turn of events" in the Crimea.