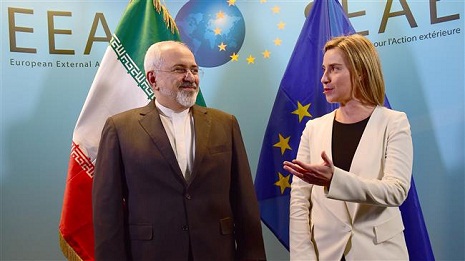 Iran
“We have always emphasized Europe’s role and the expansion of ties with European countries, and striking a deal on the nuclear issue can produce a leap in cooperation,” Zarif said in a meeting with Mogherini in Brussels, Belgium, on Monday.

He added that Iran and the P5+1 negotiators should discuss ways to find solutions to the outstanding issues surrounding Tehran’s nuclear program and reach an agreement on them.

The chief Iranian negotiator emphasized that there will be no agreement between Tehran and the P5+1 countries unless the two sides agree on all topics.

The EU official said all sides should make efforts to bridge differences on the nuclear issue.

Mogherini added that European countries are highly motivated about a nuclear agreement between Iran and the P5+1 countries and will play an effective role to help the two sides reach the deal.

Negotiations about the Iranian nuclear issue entered a critical phase on Monday with Zarif and US Secretary of State John Kerry meeting in the Swiss city of Lausanne in another attempt to narrow gaps on the outstanding issues.

The new round of talks opened in the Swiss city on Sunday as the Head of the Atomic Energy Organization of Iran (AEOI) Ali Akbar Salehi and US Energy Secretary Ernest Moniz held high-level technical talks in the presence of experts from Iran and the US as well as the AEOI spokesman, Behrouz Kamalvandi.

Speaking after his five-hour meeting with Kerry on Monday, Zarif said solutions to outstanding nuclear issues with the P5+1 countries are at hand although differences still remain between the two sides.

Iran and the P5+1 countries – the United States, Britain, France, China, and Russia plus Germany – are seeking to seal a comprehensive nuclear deal by July 1.The two sides have already missed two self-imposed deadlines for inking a final agreement since they signed an interim one in the Swiss city of Geneva in November 2013.