Law enforcement has a massive problem with these 3 cryptocurrencies 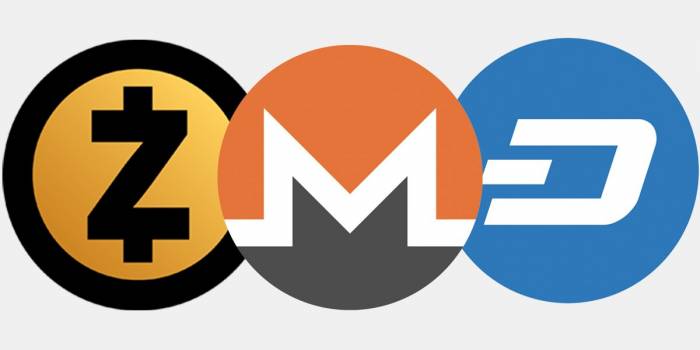 Crime linked to cryptocurrency is taking on an increasingly high profile as law enforcement agencies scramble to deal with a new technology complicating how they operate. But not all coins are created equal.

While bitcoin steals most of the headlines, with wild price swings making and breaking fortunes by the hour, a hard core of extra-secure currencies are starting to worry police forces the world over even more.

Monero (market cap $4.5 billion) is a cryptocurrency created in 2014 that uses a harder-to-trace blockchain than bitcoin, and is easier to switch with other units. Zcash (market cap $1.4 billion) was built in 2016 and is not completely private by default, but has features which can flip the currency to a "shielded" variant making it hard to trace. Dash (market cap $4.9 billion), formerly known as darkcoin, was originally derived from litecoin but has significantly more privacy features.

Jarek Jacubchek, a cybercrime analyst at Europol, the unified European police agency, told us: "We can see a quite obvious and distinct shift from bitcoin to cryptocurrencies that can provide a higher level of privacy."

"So basically, you can achieve a higher level of privacy using these 'altcoins', and these altcoins are either using stealth as the basis, like monero. There are also coins like dash that do not have stealth addresses, they have transparent addresses, but they have a mixing process that is part of the protocol."

The problem with this is that it means police forces can't easily tie transactions to individuals, which limits their ability to identify suspects, to gather evidence of criminality, or to seize criminal proceeds.

His comments echo those of Detective Inspector Tim Court of London's Metropolitan Police, who named monero in a briefing to crime reporters late last year.

Though he didn't specify others, Court added: "We see on certain dark marketplaces some cryptocurrencies being openly pushed because they offer an extra layer of anonymity." Both zcash and dash fit this profile.

Many of the platforms trading in these currencies actively resist efforts by police to acquire information from them, Court said, in contrast to more mainstream crypto infrastructure which has established procedures for providing information.

Jacubchek explained that using altcoins is a mark of sophistication in criminal organisations, not least because they need to use multiple exchanges and multiple currencies in order to access the high-privacy coins like monero.

Both men also emphasised that no cryptocurrency is inherently criminal, but are tools which can be used for ill, and these three seem especially prone to it.

Bitcoin is overwhelmingly still the medium in question, according to analysts. Tom Robinson, the cofounder of cryptocurrency analysis firm Elliptic, told Business Insider that "the vast majority of illicit activity in cryptocurrencies is still taking place in bitcoin, because of its ease of exchange and more advance infrastructure."

But bitcoin exchanges are increasingly using the same stringent checks which much of the traditional finance world uses: requiring ID, proof of address, and in some cases even a selfie, before they will let you do business. At the same time, police forces are getting faster, more diligent and more competent at tracing cryptocurrency transactions in bitcoin.

As a result, many criminals who think they are being sneaky by using bitcoin actually create more of a paper trail and hasten their own capture, according to Jacubchek, who helps police from EU member states carry out traces.

The flipside to this is that well-organised criminals are moving even further into technology that can frustrate the efforts of police forces to catch them, and put them even further beyond the reach of the law.