Ancient Egyptian statue moves on its own - VIDEO 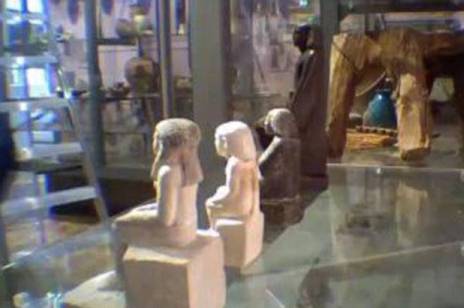 Staff at the Manchester Museum in Manchester, England say the 4,000-year-old statue, recovered from a mummy`s tomb, has been spinning without anybody moving it, NDTV reports.
The 10-inch tall statue of a man named Neb-Senu was originally an offering to the god Osiris and has been in the museum for 80 years.

The statue, made by one Neb-Senu in about 1800BC, was donated to the museum in 1933, and had been reassuringly immobile for most of that time.

Up until a few weeks ago, the statue had appeared to be stationary.

"I noticed one day that it had turned around," curator Campbell Price, 29, told NDTV. "I thought it was strange because it is in a case and I am the only one who has a key."

Price told the Sun this week that "most Egyptologists are not superstitious people,"and said when he first noticed the object had moved, his first instinct was to wonder who moved it.

“But the next time I looked, it was facing in another direction — and a day later had yet another orientation," he told the Sun this week.

Price returned the statue to its original position and set up a time-lapse video, which he says shows the statue moving without the help of humans.