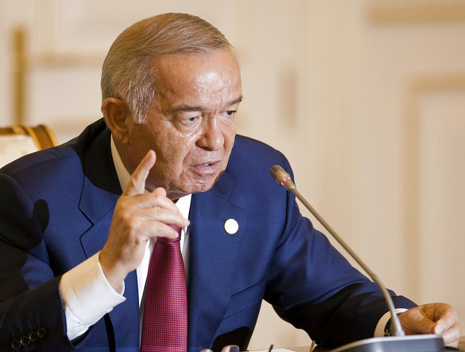 Uzbekistan is going through the motions of a presidential election this weekend, with a crushing win for its longtime leader a foregone conclusion, but the long-term future of the Central Asian nation is still far from certain.
Islam Karimov, 77, has led the double-landlocked former Soviet republic of 30 million people uninterruptedly since the late 1980s, and ruthlessly quashed all opposition to his rule.

While Uzbekistan is untroubled by any immediate signs of unrest, its future is colored with uncertainty amid a troubled security situation in neighboring Afghanistan and the lack of a clear succession plan should Karimov suddenly leave the scene. Economic woes could also be in store as a knock-on effect of the looming recession in Russia, where around 3 million Uzbeks live and work.

Karimov faces three purely nominal rivals in Sunday`s vote. In the previous election in 2007, he won 91 percent of the vote.

Since gaining independence in 1991, Uzbekistan has pursued a policy of economic self-reliance and sought to balance its diplomatic relations with the West and Russia, playing them against one another.

The United States installed a military base in the country after the Sept. 11, 2001, terrorist attacks. It was forced to abandon that facility in 2005 as relations between the countries soured following a violent government crackdown on rioters in the Ferghana Valley city of Andijan that is believed to have left hundreds dead.

Almost all Western media have been barred from reporting inside the country since that time. Independent journalists and activists face sustained harassment.

At campaign rallies ahead of the elections, Karimov said Uzbekistan would never again host a foreign military base. In a calculated snub to Russia, however, he also ruled out membership of economic blocs led by Moscow.

In recent years, Uzbekistan has also attracted strong interest from China. Beijing has pledged tens of billions of dollars in loans and investment to Central Asian nations as part of an ambitious series of energy and transportation projects.

Security is a perennial feature of official rhetoric in Uzbekistan.

Uzbek authorities have frequently signaled their anxiety over the potential threat posed by Islamic terrorism in the mainly Muslim nation. Russian news agency Interfax last week cited an Uzbek security services analyst as saying that authorities are worried by reports that militants from the Islamic State group have mustered in northern Afghanistan.

In an apparent acknowledgment of that danger, the United States announced in January that it had given Uzbekistan more than 300 armored vehicles to help boost border security and combat drug trafficking.

While Karimov is depicted in state media as being in firm control over the country, the state of his health has been a topic of lively speculation for more than a decade.

In late January, an exiled opposition group, the Popular Movement of Uzbekistan, posted a story on its website citing unnamed sources as saying the president had fallen into a coma. Karimov`s failure to appear in public for several weeks in the wake of that report served only to fuel rumors that he may indeed have fallen ill.

Although little is known of Karimov`s private life, the dramatic decline in the fortunes of his eldest daughter — once believed by some to be a possible successor — has made international headlines.

Once Uzbekistan`s permanent representative to the United Nations and other international organizations in Geneva, Harvard-educated Gulnara Karimova has been targeted by a criminal investigation in Switzerland for suspected money laundering. Karimova is also facing corruption charges in Uzbekistan, where she has reportedly been under house arrest since the summer of 2014.

The presidential election taking place Sunday is the fourth that Uzbekistan has held since independence. Although Karimov should have been limited by the constitution to two five-year terms, ambiguous changes to the law have enabled him to circumvent that limit.

About 20 million voters are eligible to cast their ballot. Results are expected to be announced on Monday.