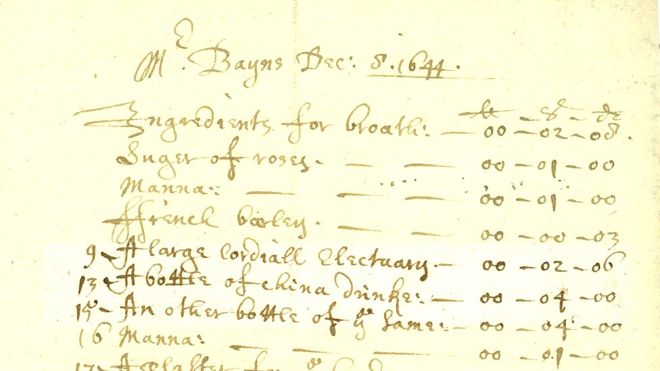 A 374-year-old bill with "one of the earliest" mentions of tea in England has been unearthed in an archive.

A curator from Temple Newsam House, near Leeds, found the 1644 bill for medicinal ingredients bought by the estate.

Rachel Conroy found mention of bottles of China drink, the old name for tea, in the West Yorkshire Archives.

Each bottle of China drink on the list was priced at four shillings and would have been a "status symbol", she said.

Ms Conroy, who was researching for an exhibition on beer, described the find as "an exciting discovery".

"Back in the 1640s, tea had only just begun to make its way to England and would probably have been something of a novelty and quite a status symbol," she said.

It is "thought to be one of the earliest written references to tea in England", said Leeds City Council.

William Gorman, of the UK Tea Association, said the bill was a "lovely and very special find" and fitted with the known history of tea.

China drink would be green tea and "extremely expensive", he added.

The Chinese had been drinking tea for millennia and it was one of the first goods merchants brought back from trips to the Far East at the beginning of the 17th Century.

The drink became popular, first as a medicine and then as an exotic item in the coffee shops of Europe.

In 1660 the diarist Samuel Pepys wrote: "I did send for a cup of tee (a China drink) of which I never had drank before."

The British now drink about 165,000,000 cups of tea daily, according to the UK Tea Association.

Temple Newsam House has a collection of British ceramics on display which includes many used for serving tea.