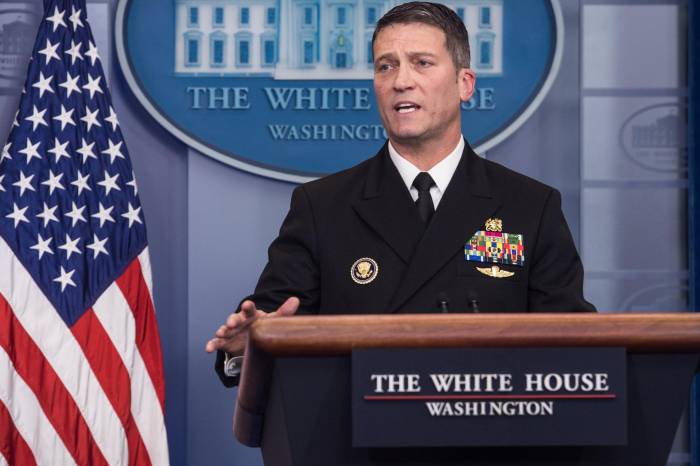 U.S. President Donald Trump’s physician Ronny Jackson on Thursday withdrew from consideration to head the Veterans Affairs department after allegations that he had been lax with prescription drugs and drank alcohol on the job, Reuters reported.

The allegations, which Jackson categorically denied as false, had prompted the Senate to put a hold on his hearing for the job of leading the federal government’s second largest department.

The upset was the latest chaotic personnel decision to rock Trump’s White House, which has been roiled by an unusually high number of firings and resignations.

During his campaign, Trump had pledged to clean up the VA, which oversees healthcare and benefits for about 20 million military veterans, a constituency with considerable political clout.

The agency has long been criticized for the quality of its care and the red tape that veterans encounter. Trump fired his first secretary, David Shulkin, in March after concerns about unauthorized travel expenses.

Jackson, 50, was a surprising pick for the job, and even Trump acknowledged he lacked experience running large organizations.

On Thursday, Trump lashed out about the uproar in a phone interview with Fox News, blaming Democrats who had compiled a list of complaints about Jackson from military medical officials who had worked with him.

“He would have done a great job,” Trump said of Jackson. “These are all false accusations. They’re trying to destroy a man.”

Trump singled out Senator Jon Tester, the top-ranking Democrat on the Senate Veterans’ Affairs committee, who is up for re-election in November in Montana, saying Tester “has to have a big price to pay in Montana.”