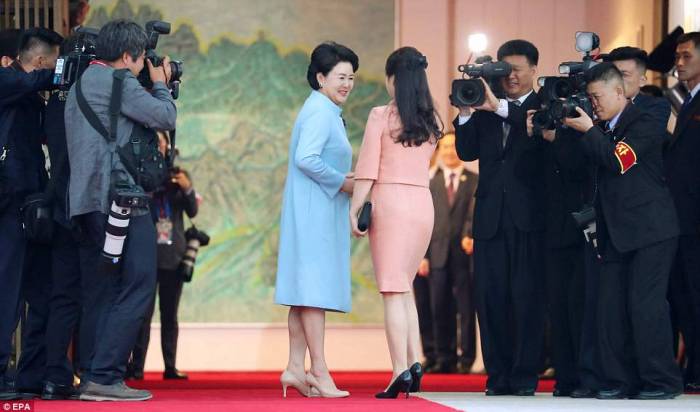 Amid momentous peace talks the wives of North Korean leader Kim Jong-Un and South Korean President Moon Jae-in met today for the first time - and appeared to get on famously.

Ri Sol-ju, the wife of Kim Jong-un, crossed the border at the Demilitarized Zone into South Korean territory on Friday to attend the summit dinner hosted by President Moon Jae-in.

Before sitting at the dinner table, she spoke briefly with South Korean first lady Kim Jung-sook, marking the first-ever meeting between the first ladies of the two Koreas.

Upon her arrival at the truce village of Panmunjom at 6:15 pm, she headed directly for the Peace House building on the southern side of the village, where the welcome dinner is set to take place.

Moon and Kim had a historic summit on the second floor of the building earlier in the day, following which they announced that the Koreas will push for three-way talks including Washington or four-way talks that also include Beijing on converting the armistice into a peace treaty and establishing permanent peace on the Korean peninsula.

They agreed to open a permanent communication office in the North Korean town of Kaesong, resume temporary reunions between relatives separated by the Korean War and will seek to expand civilian exchanges and pursue joint sports and cultural events.

'I'm happy to hear from my husband that the summit was a success. I hope things between the two leaders do go well,' South Korea TV quoted Ri as saying during the meeting. 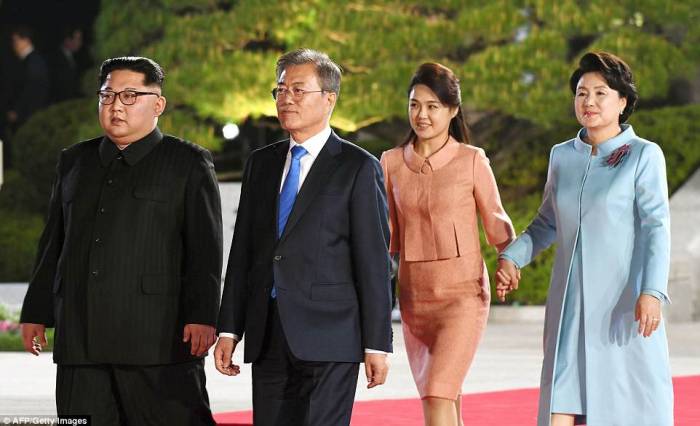 The two ladies seemed to really hit it off, with Kim Jung-sook seen laughing happily after greeting her North Korean counterpart.

They could be seen clasping hands as photographers swarmed them, rushing to capture the historic moment.

Later, the first lady's met up with their respective husbands before introducing themselves to the other leader.

The South Korean first lady could be seen smiling widely as she met Kim Jong-un, shaking his hand and looking animated as she engaged him in conversation.

Ri Sol-ju, though less animated than her counterpart, also seemed pleased with the meeting, toasting President Moon Jae-in and smiling throughout the dinner.

She was dressed elegantly in a pink, Western dress, a knee length skirt and with her hair coiffed over the side of her face neatly.She could later be seen smiling while seated next to her husband at the summit dinner.

The couples seemed in high spirits throughout the historic event.