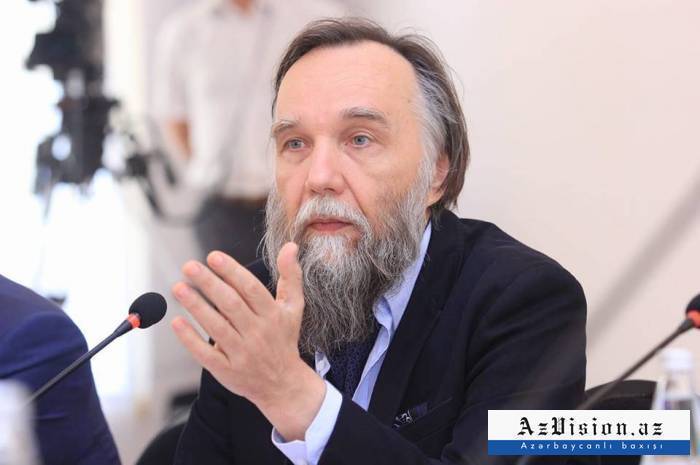 Azerbaijan is Russia's main strategic partner in the Caucasus, Leader of the International Eurasian Movement Aleksandr Dugin said in an interview with Moscow-Baku news website.

"The geopolitical vector of the rapprochement of our countries was first laid by the presidents of Russia and Azerbaijan, who pursued a policy of the strategic partnership,” he said. “The idea of ​​the International Eurasian Movement, the Izborsk Club and other Russian public figures was to outline this Moscow-Baku Axis.”

“Our presidents make a decision, develop a policy, then various events are held, visits of delegations are made,” Dugin said. “We decided to involve experts, thinking people, those who really think about fate of our countries, into this process. The first event entitled "Moscow-Baku Axis" was held in Moscow in 2017. The second event was planned to be held in Azerbaijan."

He added that Head of the Izborsk Club Alexander Prokhanov offered to hold an event in the area of Nagorno-Karabakh region controlled by Azerbaijan.

"Although the discussion of issues related to the settlement of the Armenia-Azerbaijan Nagorno-Karabakh conflict is not the main goal, but it is one of the most important topics of our meetings," Dugin said. “Among the topics which are discussed at the Moscow-Baku Axis are everything related to the development of our relations, the strategy of their rapprochement, peace in the South Caucasus.

“For us Karabakh is a symbolic place where we are holding our event, which is testified by the fact that Azerbaijan is Russia's main strategic partner in the Caucasus,” he added. “It is worth stressing that Karabakh from the point of view of the Russian Federation and the whole international law is Azerbaijan’s territory. The holding of the conference in Karabakh, on the territory of Azerbaijan, fully corresponds to the legal background of this situation.

“Of course, this is a sign and a symbol of Russian public figures’ attitude to the problems of the South Caucasus, Russia-Azerbaijan relations, the Karabakh conflict,” he said. Therefore, we stressed in the name of the event that Azerbaijan is Russia's main strategic partner in the South Caucasus."

Dugin stressed that presently, there is an active rapprochement between Russia and Azerbaijan, which to some extent is the restoration of historical justice.

"Relations with Azerbaijan have come to the fore,” he said. “Russia wants to emphasize the loyalty to the Moscow-Baku strategic axis and today we can do it visually. The presence of Russian public figures, patriots in Karabakh, on the Azerbaijani side is a sign, and our visit has great importance.”

“In Jojug Marjanli we will talk about our partnership, our vision and discussion of the Karabakh problem, and of course, about the way of making the Moscow-Baku Axis deeper, more effective and more fundamental,” Dugin said.

The conference is being held in Jojug Marjanli village of Jabrail district, which was liberated from the Armenian occupation. Russian public figures are taking part in the conference.

The name of the international conference is “Moscow-Baku Geopolitical axis. Azerbaijan is Russia's only ally in the South Caucasus.”

The organizers of the event are the International Eurasian Movement, the Azerbaijani Community of Nagorno-Karabakh, the Russian Community of Azerbaijan and the Izborsk Club.