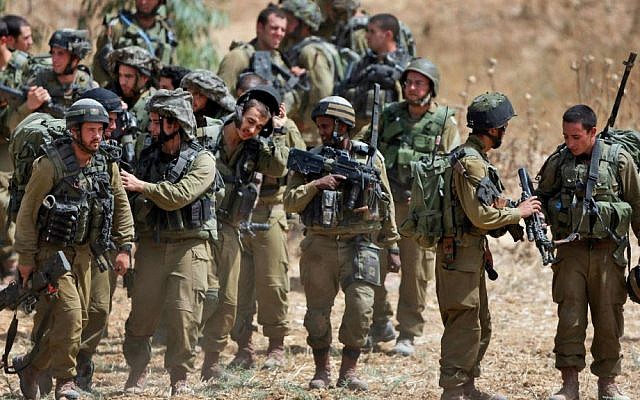 @The Times of Israel

The Israeli military said it fired at a Hamas facility in northern Gaza Wednesday morning in response to fire from the Strip aimed at Israeli security forces.

The tank fire killed two 23-year-old members of the Izzedine al-Qassam Brigades' al-Nukhba elite unit and wounded six others, reports in Gaza said. The al-Qassam Brigades it the military wing of Hamas. The two killed are Abd al-Hafez al-Silawi and Ahmad Murjan.

According to the reports, the Israeli attack hit a graduation ceremony of al-Qassam fighters at Hamas' Askelan base. Senior Hamas figures were reportedly in attendance. The Gaza Health Ministry confirmed the two deaths.

The deadly incident comes as Egypt brokers a cease-fire deal between Hamas and Israel.

Two main proposals are under discussion – one presented by Egypt and the other by United Nations special Mideast envoy Nickolay Mladenov. The Egyptian proposal gives high priority to internal Palestinian reconciliation between Hamas and Fatah; to exchanges of prisoners and of bodies of soldiers, with Israel; and to an agreement for a long-term cease-fire, to last from five to seven years, with the first step being a cease-fire within days of signing the accord.

Both Fatah and Hamas have visited Cairo over the past few weeks to discuss the deal, which also promotes reconciliation between the Palestinian Authority and Hamas.

Official sources in Ramallah are concerned that Israel and Egypt are advancing a deal to improve living conditions in the Gaza Strip without involvement by the Palestinian Authority.

A Palestinian official said that the proposal being promoted in Jerusalem and in Cairo makes the United Nations responsible for promoting the projects while the Egyptians would be involved in the evaluation and supervision over the projects. The funding, he said, would come mainly from the Gulf States, including Qatar, with additional funding from the European Union and the United States. A reported $650 million would be invested in projects, without direct involvement by Hamas or the PA.