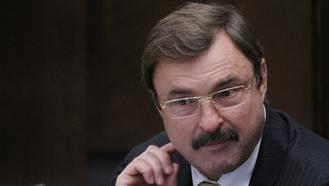 The spring session of Russia`s upper house of parliament came to an end this week, but that may not signal an end to the steady stream of wealthy senators who have stepped down as the Kremlin put forward new restrictions on officials owning assets abroad.
The nine members of the 166-seat Federation Council who have left since President Vladimir Putin first floated the asset ban in December do not openly attribute their decision to the tighter rules. But at least five of them figure in Forbes magazine`s rating of richest Russians, and their fellow senators, as well as experts, speak openly of moneyed officials` new dilemma: wealth based overseas versus political power at home.

“Either they chose their own business and foreign assets … or they chose absolute loyalty to the new regime,” said Pavel Salin, a political analyst and director of the Presidential Financial University.

The most recent defector was Dmitry Ananiev, whose resignation was approved Wednesday, the last day of the senate`s spring session. Ananiev jointly controls Russia`s second largest privately owned bank, Promsvyazbank, with his brother Alexei Ananiev. As of this year, the two men were together worth $3.4 billion, according to Forbes.

Ananiev is not the richest senator to have stepped down since Putin called for the asset restrictions. Other departures from the Federation Council in 2013 include majority owner of fertilizer company Phosagro Andrei Guriev, valued at $4 billion; private investor Nikolai Olshansky, worth $750,000; portfolio investor Vitaly Malkin, valued at $850,000; and construction company owner Andrei Molchanov, who has $1.65 billion, by Forbes`s estimates.

Federation Council Speaker Valentina Matviyenko said Thursday that the trend could continue, with two more unspecified senators – both ranked by Forbes in its list of top 200 wealthiest Russians – possibly quitting the house in the autumn.

The departures, however, have not been limited to senators, with businessmen lawmakers stepping down from other legislatures as well.

The State Duma, parliament`s lower house, accepted the resignation of billionaire Anatoly Lomakhin in February – the same month the new legislation was submitted for consideration, and less than six months after he took up the post.

And earlier this month Roman Abramovich, Russia`s 13th richest man, worth $10.2 billion according to Forbes, left his position as chairman of the legislature in the remote region of Chukotka.

The new legislation that seems to have scared off the senators forbids officials – including members of regional and federal governments, federal judges, CEOs of state corporations, regional governors and a handful of others, including the president – from having bank accounts and some classes of financial instruments outside of Russia.

The law, signed by Putin in May, comes into force August 18.

The Kremlin has touted the legislation as a corruption-fighting measure; however, some analysts have suggested it is part of Putin`s attempt to “nationalize the elite,” by tethering officials more firmly to Russia, and thereby to strengthen his own grip on power.

Linking Resignations to the New Rules

The outgoing senators have not explicitly mentioned the asset ban when explaining their resignations, but many informed observers suggest it played a role, with some fellow senators directly identifying the new restrictions as the reason behind their colleagues` departure.

“Why officially admit it? It`s completely normal to put on a happy face in a bad situation, and just resign without superfluous comment,” said political analyst and journalist Pavel Svyatenkov.

The official explanations for resigning varied: Olshansky said he was suffering from poor health; Guriev said he wanted to spend more time working in business; and Malkin announced he was leaving to protect the reputation of the Federation Council after being targeted in a “smear campaign” involving reports of dual citizenship.

Although billionaire banker Ananiev insisted earlier this week that he was stepping down to make way for new people, Matviyenko, the senate speaker, said Thursday that his decision was explicitly linked to the new law.

“Senator Ananiev has shown himself to be a law-abiding citizen,” Matviyenko told reporters, according to Russian media. “He studied the federal law forbidding officials and senators from having foreign assets and bank accounts a second time, and made a decision to … continue working in business.”

Sergei Lisovsky, formerly a successful businessman and a Federation Council member since 2004, told RIA Novosti there was a clear connection: “A law was passed that forbids deputies from holding certain assets outside the [Russian] Federation and everybody … is making their own decision: renounce ownership or resign.”

Analysts and officials noted that both the outgoing senators themselves and the Federation Council could suffer some repercussions after the defections – the former in terms of greater vulnerability, the latter in terms of expertise.

As lawmakers, the senators enjoyed not only a voice in the legislative process, but also a great degree of legal immunity from prosecution.

“A government position for a rich person is not so much an opportunity for lobbying – because with money you can just buy officials; it is a guarantee against persecution by siloviki [current and former state security officials] and competitors,” said Salin, of the Presidential Financial University.

At the same time, the stream of successful businesspeople leaving legislative bodies could negatively impact the level of expertise there, especially in economics and finance.

“Unfortunately, there are fewer and fewer specialists in government who understand the trickiness of financial markets,” Alexei Savatyugin, a former deputy finance minister, tweeted Wednesday after Ananiev`s resignation had been approved.

Ananiev, in the Federation Council since 2006, had been the deputy head of the Budget and Financial Markets Committee.