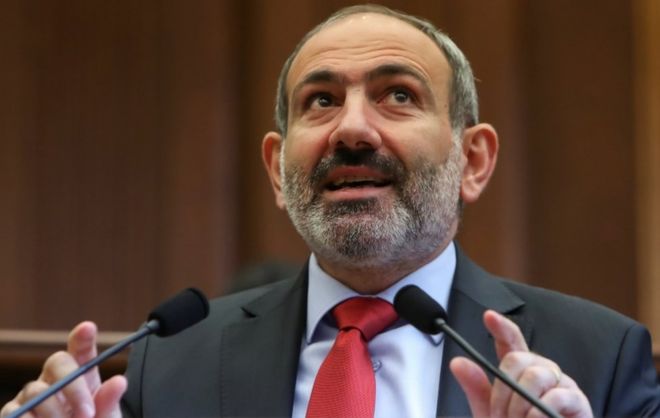 His bloc won more than 70% of the vote, the country's election commission said.

He now has a parliamentary majority to push through his programme of tackling corruption and reforming the economy. Poll turnout was low, at about 49%.

Historically, Armenia's elections have been marred by fraud and vote-buying - but correspondents said there was hope that this one would be different.

International observers from the Organization for Security and Co-operation in Europe were among those monitoring the process.

What is the result?

Its nearest rival, the moderate Prosperous Armenia party won just over 8%. Led by tycoon and arm-wrestling champion Gagik Tsarukyan, it was part of the ruling coalition in the outgoing parliament.

Bright Armenia, a liberal pro-Western party, won about 6% of the vote, the commission said.

Each party needed at least 5% of the vote to enter the 101-seat National Assembly.

Armenia's constitution states that 30% of seats in parliament must go to opposition parties.

What will it mean for Armenia?

At a polling station in the capital, Yerevan, voters said they hoped Mr Pashinyan would be able to deliver the ambitious changes he has promised.

One woman, who gave her name as Narine Harutyunyan, said she felt "very optimistic," adding, "I hope that my vote is going to play a role so that there will always be a smile in the eyes of Armenians."

Analysts say the 43-year-old will aim to keep his promises while staying in the good books of Armenia's key ally, Russia.

A former Soviet state of three million people, Armenia hosts a Russian military base and depends on Moscow for its security.

Mr Pashinyan has said he hopes to "step up co-operation with the United States and European Union".

How have the PM's critics reacted?

The revolution led by Mr Pashinyan ousted the country's 10-year President Serzh Sargsyan, a member of the Republic Party. He was accused of clinging to power after taking on the newly-enhanced role of prime minister when his term ended.

Now senior Republican Party figures have accused Mr Pashinyan of trying to turn Armenia into 1930s Germany, and of becoming a Hitler figure.

His critics say his "cult of personality" will weaken multi-party democracy.

Armen Ashotyan, vice-president of the Republican Party, complained before the election that "all political parties were deprived of time to prepare well".

He added that he expected "so-called post-revolutionary euphoria" would be reflected at the ballot box.