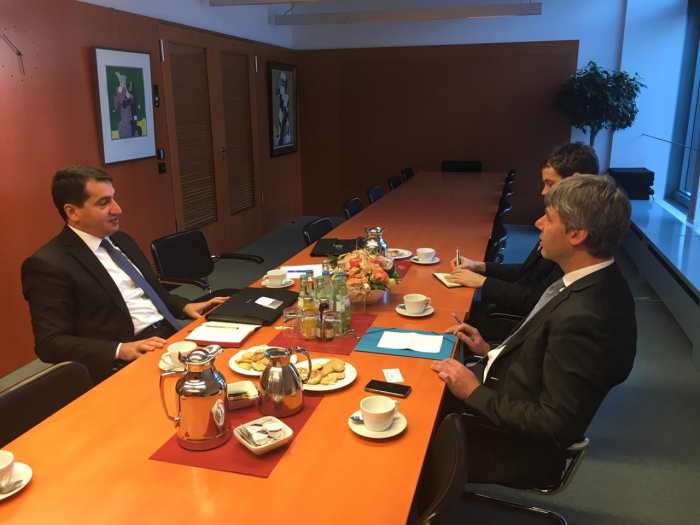 Hikmat Hajiyev, head of the Department of Foreign Policy Affairs of the Azerbaijani Presidential Administration, paid a working visit to Berlin on March 18.

As part of his visit, Hikmet Hajiyev met with Advisor to the Federal Chancellor on Foreign and Security Policy Jan Hecker, Head of the Foreign Policy Directorate of the Administration of the Federal President Thomas Berger and the head of the department of the German Federal Ministry of Foreign Affairs for cooperation with countries of Eastern Europe, the Caucasus and Central Asia, Ambassador Michael Siebert.

During the meetings, there was a wide exchange of views on Azerbaijan’s foreign policy, relations with Germany and the EU, regional issues, as well as the Armenian-Azerbaijani Nagorno-Karabakh conflict.

Hikmat Hajiyev stressed that, despite the location of Azerbaijan in a complex geopolitical region, the country pursues an independent and based on national interests policy, has established good neighborly relations with its neighbors, with the exception of Armenia.

He also noted that Azerbaijan has laid the foundation for international cooperation in the region, and spoke about Azerbaijan's role in the energy security of the EU, its major regional projects, including the Southern Gas Corridor, projects serving the development of the North-South and West-East transport corridors.

Hajiyev further spoke about the contribution of these projects and the multidirectional foreign policy of Azerbaijan to peace, stability, development and cooperation in the region. He also spoke about the consequences of the Armenian military aggression, the process of the peaceful settlement of the Nagorno-Karabakh conflict, as well as the expectations of Azerbaijan regarding the new leadership of Armenia.

During the meetings, the fair position of Germany on the Armenian-Azerbaijani Nagorno-Karabakh conflict and the country's support to the conflict resolution process, as well as the potential for further expansion of ties between Azerbaijan and Germany, were discussed.

German officials called Azerbaijan a reliable partner of Germany in the region, as well as a major economic partner, highly appreciated the environment of multiculturalism and religious tolerance in Azerbaijan and welcomed the reforms carried out in the country under the leadership of President Ilham Aliyev.

The meetings held by Hikmat Hajiyev in Berlin were also attended by the Azerbaijani Ambassador to Germany Ramin Hasanov and the embassy official Vugar Gafarov.