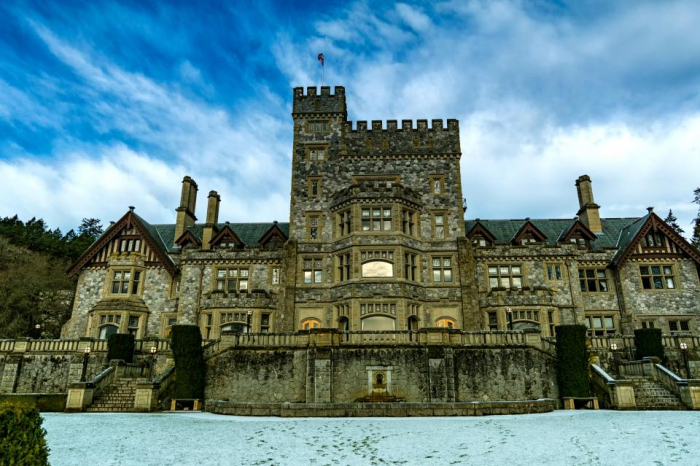 THE Royal family were to be smuggled out of Britain to Canada if the Nazis invaded during World War Two in a top secret plan, it has been claimed.

While more likely to be recognised as the filming location for X-Men today, Canada's imposing Hatley Castle was once earmarked as the perfect hideout for King George VI and his family should they ever need to escape.

The Royal family would be smuggled to Hatley Castle in Canada if the Nazis invaded, it has been claimedCredit: Alamy
King George VI even visited the imposing property as part of a tour of Canada in 1939 - a few short months before the war.

And in one diary entry written by Mackenzie King, who served as Canadian prime minister during the war, he said the king was aware of the property.

Writing on August 30, 1941, he said: "At one stage, [the king] asked me about what had become of the Dunsmuir property.

"I told him of the government having purchased it and of it being used for naval purposes.

"I could see what he had in mind was the possibility of making a sort of Canadian residence for the King."

The property had been purchased by the Canadian government from the coal baron family the Dunsmuirs - intended to be a naval training facility.

Archives manager Jenny Seeman also said it would have been possible for the government to have considered the property as a potential secret new home. for the royals.

She told The Capital: "Although it isn't written in any sources that I have seen, it is perfectly possible that [the] King agreed to the use of the Hatley Park site for emergency training ... and at the same time quietly recognised that it was a sound investment for the Canadian government, should they be called upon to house the royal family."

Canada wasn't a stranger to helping Britain during wartime - with Operation Fish launched.

The operation saw more than 1,500 tonnes of gold ingots and coin moved from the UK to be stored in Montreal.

Queen Elizabeth II was only 13-years-old when WW2 began.

During the war, the royals bravely stayed in London while Britain battled the Nazis.

But the plan was to smuggle the Windsors out of Buckingham Palace in bulletproof vehicles if Adolf Hitler’s forces were to reach our shores.

In the event of a nuclear attack, files exhibited by National Archives in 2004 revealed that the Queen would be whisked out of the country.

One 1967 document marked “Top Secret” detailed how her Majesty would be taken to a secret underground war bunker.

The Royal Family would then be taken to Worcestershire if the Germans had invaded.

The plan, codenamed Rocking Horse, would have whisked the Royals to Madresfield Court, a 12th Century mansion in the county, reports the Mail.

The bolthole is located near to the River Severn which would have been used as an escape route if their cover was blown.

Under the plan, 200 Coldstream Guardsmen were trained as bodyguards and drivers while the Windsors were all instructed to have one suitcase packed and ready.