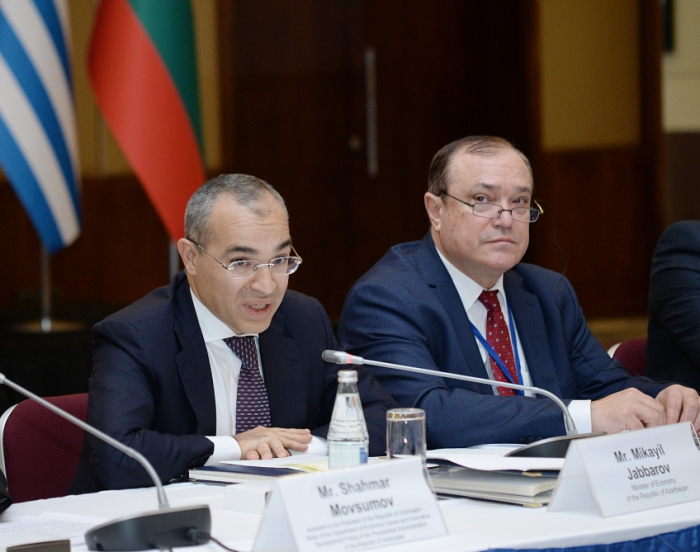 Adhering to its tradition, Armenian delegation, who attend an international conference dedicated to the 20th anniversary of the signing of the Basic Multilateral Agreement on International Transport for the Development of the Europe-the Caucasus-Asia Corridor (TRACECA) being held in Baku, committed provocation.

Delivering a speech at the event Armenian deputy territorial administration and infrastructures minister Armen Simonyan voiced thoughts on the ineffectiveness of TRACECA, at the same time protested the program of the event.

He wanted the program to avoid political issues.


“We are far away from politicization on these issues. Why should we visit the Alley of Honour? Why has it been included in the program? There were not any thematic political events while the 13th meeting was held in Yerevan.  We consider that using such a platform for these purposes is unacceptable. I would like to note that the purpose should not be changed here, all of the steps should be directed to the effectiveness,” said A. Simonyan.

Azerbaijani Minister of Economy Mikayil Jabbarov has not left speech of Armenian delegation unresponded. The Minister commented on both Armenian Deputy Minister’s words on TRACECA and protest against the program: “I couldn't keep myself away from touching upon the speech of my colleagues from neighboring Armenia. I think I should respond to them in such a way that they expressed their opinions.

Probably, this way is more understandable. I understand the reaction. I consider the reaction can be divided into two parts. One of these parts is related to opinions sounded on TRACECA. I thank my counterparts, who deliver speeches. I think they have clarified what TRACECA contributed to us with enough certainty and simple figures.  As an organizer of the event and responsible country for conferences and programs, I consider standing on the issue as a duty by my own self. I want to start from that I understand the reaction of neighbors very well. They have come from Yerevan to Baku in any way and saw Baku themselves. I understand it is not so easy for them to accept what they have seen.

Secondly, we prefer a constructive approach. However, we know destructiveness is easier, more destructive and consequences of this destructive policy are firstly observed in the neighboring country, which has been isolated from great projects and brought itself to a transportation deadlock, economic deadlock, and does not want to get out of there.

As for the program, for those who haven’t understood the content, I would like to reiterate that if the measure wouldn’t be taken 20 years ago enabling the realization of this project the anniversary of which we are celebrating today, without that strategic view, the successes which we mention today wouldn’t be possible. Just the great Heydar Aliyev invited and carried with himself the international leaders and heads of state. Of course, as in every civil society, when drawing up the social program of the anniversary event, the Azerbaijani side was guided with the aspect of the attitude to the memory of people who had made contributions to the development of the region.

In general, as it concerns the issue of esteem for the memory, I think you should pay attention to the center of your capital city once again. Look at the monument erected in your city. Remember that in the next year, the 75th anniversary of victory over fascism will be celebrated and think over it again: have you erected a monument for a proper person?”

The Minister also mentioned that an individual social program had been drawn up for the Armenian delegation: “And as for you, I personally invite you to attend the Heydar Aliyev Center. An exhibition is held there dedicated to the history of the city where you were born. That exhibition has been presented to us by our Georgian colleagues from the Georgian Museum where it is demonstrated on a permanent basis. I assure you that you will learn many new things about Irevan khanate and the foundation of Irevan city which you can’t read from history textbooks. Of course, if it is of interest to you... As for the TRACECA caravan, despite all counter-attempts, it will go forward.”