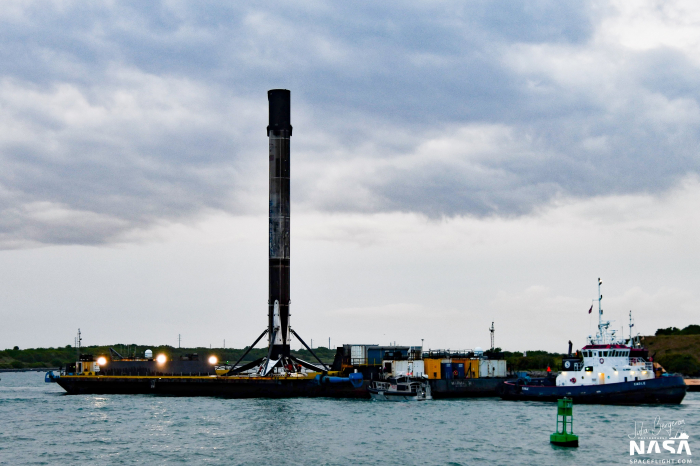 As the second SpaceX launch of the year, and the first of many Starlink missions scheduled to launch in 2021, the company launched the Starlink v1.0 L16 mission — the 16th launch of operational satellites and 17th Starlink flight overall.

Liftoff occurred January 20th at 8:02 EST (13:02 UTC) from LC-39A at the Kennedy Space Center, marking the record eighth launch and landing of the same Falcon 9 booster.

This mission was originally scheduled to be the third SpaceX launch of the year. However, a delay to the Transporter-1 mission will now make Starlink v1.0 L16 the second launch of the company’s busy 2021 schedule.

The Purpose of Starlink

Starlink is SpaceX’s own constellation of satellites designed to provide low latency internet anywhere in the world.

Current satellite internet relies on large satellites with long lifespans, generally 15 years or more, placed into geostationary orbit, approximately 35,800 kilometers (22,245 miles) above the earth’s surface and directly over the equator. This allows only a few satellites to cover most of the earth.

However, due to the satellites’ high orbit, it takes more time for a signal to travel to and from the satellite, approximately 550 milliseconds. This prevents current satellite internet providers from offering low latency, high-speed internet like Starlink aims to provide.

Starlink’s solution to the latency problem is to have thousands of smaller, short-lived satellites, with lifespans of around five years, to be placed into a Low Earth Orbit of approximately 550 kilometers (340 miles) and lower. This allows latency to be much lower than any geostationary satellite since the signal does not travel as far.

Starlink satellites also use a flat-packed design that allows many satellites to be launched on a single mission, with the added bonus of being smaller and cheaper to manufacture in mass production. Current geostationary satellites don’t benefit from large scale manufacturing due to only deploying one or a handful of spacecraft.

Designing the satellites to have a shorter lifespan compared to their geostationary counterparts also allows the constellation to be continuously upgraded as new satellites are constantly launched.

For example, currently the user terminal and a ground station must be in the range of the same satellite in order for a packet of data to reach its destination. However, SpaceX wants to equip future satellites with a laser interlink.

Laser interlinks will allow data to be transferred satellite to satellite instead of satellite to ground station. Due to the speed of light being faster in a vacuum compared to in the atmosphere, this can allow for faster data transfer, as well as the ability to serve areas where no ground station is available, such as the middle of the ocean.

Another benefit of a Low Earth Orbit constellation such as Starlink is natural orbital decay. If a satellite fails in orbit and is unable to de-orbit itself, orbital decay caused by drag will ensure the satellite de-orbits in weeks to a few years, depending on the satellite’s altitude. This ensures a minimum number of dead satellites are left behind, which can cause possible collisions with other satellites in orbit.

If a satellite encounters issues on orbit but is still capable of de-orbiting, the satellite can actively do so rather than waiting for the slower orbital decay due to drag.

Illustration showing the difference between orbits used by Starlink satellites and by other internet satellites – via SpaceX
SpaceX is currently offering a beta version of the Starlink internet service, jokingly named the Better Than Nothing Beta. Users pay $500 for the Starlink terminal and router and then $99 per month for the service.

Invitations to participate in the beta were sent out to people who signed up through the official Starlink website and live in parts of the northern United States, southern Canada, and very recently the United Kingdom.

The results so far have been very promising, with SpaceX reporting speeds of 100mbps with 20-40ms latency, well below geostationary satellite latency. Many users have reported speed tests even higher than 100mbps.

The v1.0 L16 mission will carry a full batch of 60 Starlink satellites into orbit, inclined at 53 degrees. Once in orbit, each satellite will deploy its single solar array and turn on its Krypton ion thruster to begin raising its orbit and maneuvering to its intended orbital plane.

Each Starlink satellite weighs approximately 260 kilograms (573 pounds), with a full stack of 60 satellites weighing around 15,600 kilograms (34,380 pounds). This is close to the upper limit of what Falcon 9 can launch into LEO while still being recovered on one of SpaceX’s drone ships.

This brings the potential size of the constellation to 42,000 satellites, which will allow many users to be able to benefit from Starlink around the world.

The first stage booster assigned to was mission is B1051.8, the same booster that launched the Demo-1 mission in March of 2019, the uncrewed first flight of SpaceX’s Crew Dragon spacecraft. B1051 then launched the RADARSAT Constellation Mission in June 2019, Starlink L3 in January 2020, Starlink L6 in April, Starlink L9 in August, Starlink L13 in October, and lastly, SXM-7 in December. This makes B1051 the new flight leader Falcon booster.

A Falcon 9’s booster designation comes from SpaceX’s internal naming structure. “B1” means it is a first stage booster, “051” means it’s the 51st Falcon 9 booster to be built, and the “.8” means the booster is going to perform its eighth flight.

Falcon 9 Block 5 is designed to be flown ten times without major refurbishment, and as of right now no single booster has reached ten flights. However, two boosters, B1049 and B1051, have both flown seven times, so the first booster to fly ten times may be achieved relatively soon.

After helping propel the second stage and payload toward orbit, the booster landed on SpaceX’s drone ship Just Read The Instructions (JRTI), positioned about 630 kilometers downrange from the launch site in the Atlantic Ocean. This was achieved despite high ground winds which made this landing an “envelope expansion” scenario.

After landing, the booster will be brought back to Port Canaveral to be unloaded from the drone ship and transported away for refurbishment ahead of its next flight.

This was also a new booster turnaround record of 39 days since its last launch. The current record was just over 51 days, held by B1060, between the Starlink v1.0 L11and L14 missions.

Read the original article on www.nasaspaceflight.com.