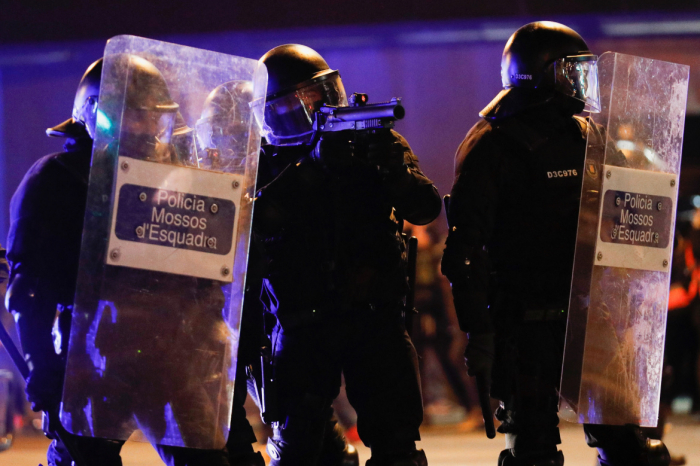 Ten people were arrested in Barcelona on Saturday for assaulting police officers in fresh unrest over the jailing of a rapper for glorifying terrorism and insulting royalty in his songs, AzVision.az reports citing Reuters.

Pablo Hasel, known for his anti-establishment lyrics, was arrested on Feb. 16 after failing to report to serve his sentence, prompting debate over freedom of expression and sparking sometimes violent protests in Barcelona and Madrid.

On Saturday evening police in Barcelona chased protesters after they hurled glass bottles, set fire to a police van and smashed the fronts of shops and banks.

“Barricades and looting continue in the area of central Barcelona. For safety do not approach this area,” Mossos d’Escuadra, the Catalan regional police, said on Twitter.

Some “hooded groups” were looting along Barcelona’s famous Rambla street, while firefighters were dealing with fires in shops and banks, police said, adding there were “several banks with serious damage”.

Ten people had been arrested for assaulting police officers, the Mossos d’Escuadra tweeted.

Earlier, some 2,000 people wearing face masks and carrying banners marched through the city to call for Hasel’s release.

Hasel’s case has put the spotlight on freedom of expression in Spain, prompting the government to announce it would relax free speech laws.

It has also highlighted the growing frustrations of many young Spaniards, from job insecurity to anger at Spain’s political establishment.