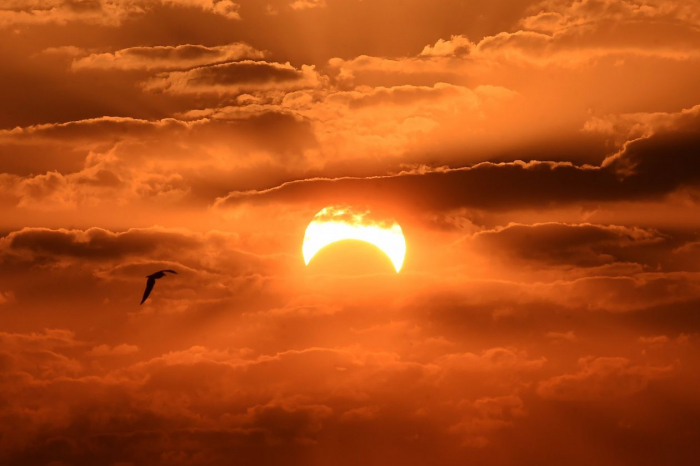 The first of two solar eclipses to occur in 2021 will take place on June 10. Weather permitting, the “ring of fire” eclipse will provide a dramatic show for skywatchers in the northeastern U.S. as well as those in parts of Canada, Greenland, Europe and Asia.

Those in the direct path of the eclipse in Northern Canada, Greenland and Siberia will see what astronomers call an annular eclipse: At the eclipse’s peak, the moon will obscure the central portion of the sun to appear as a bright circular fringe of sunlight surrounding a dark disk. Annular comes from the Latin word annulus, meaning ring.

The moon is closer to the Earth, so it appears large enough to fully block the sun. This allows the atmosphere around the sun, called the corona, to become visible.

The moon is at or near the farthest point from the Earth in its orbit, so it appears smaller than the sun, leaving a thin outer ring of sun unobstructed.

People just off the eclipse’s direct path will see a partial eclipse. In New York, Philadelphia and Toronto, our star will look like a pair of horns protruding from the horizon, while people in Montreal and Boston will see something resembling a shark’s fin—as if the moon had taken a bite out of the sun, according to the Great American Eclipse website.

The eclipse comes 15 days after the year’s only total lunar eclipse, which some called the super flower blood moon. The moon was at its closest point to Earth during that eclipse and thus appeared a bit bigger than usual—a supermoon. But by June 8, the moon had reached its most distant point in its orbit around Earth, said Jackie Faherty, an astrophysicist at the American Museum of Natural History in New York.

The moon will begin to cross in front of the sun at 4:12 a.m. EDT on June 10 and will end its transit roughly five hours later. But for any given location, the duration will be briefer, said Dr. Faherty. In New York, weather permitting, the eclipse will be visible starting at 5:24 a.m., will reach its peak at 5:32 a.m. and will end at 6:30 a.m.

Some are taking extraordinary measures to watch Thursday’s event. Jay Pasachoff, an astronomy professor at Williams College in Williamstown, Mass., who has seen 72 solar eclipses, plans to be among a group of 35 eclipse-chasers who will board a chartered jet from Minneapolis and fly along with a 3½ hour, round-trip route through Canada so they can enjoy an unobscured view of the annularity.

“It’s very exciting to see,” Dr Pasachoff said of a solar eclipse. “It’s mind-boggling to be in the straight alignment of the Earth and the moon and the sun.”

The June 10 eclipse won’t reproduce the eerie effect of the total solar eclipse of 2017, which darkened skies and lower temperatures across a swath of the U.S.

The most recent total solar eclipse occurred last December and was witnessed by people in Argentina and Chile. The next one will occur in December in the skies over Antarctica. Dr. Pasachoff said he would board an eclipse-chasing flight from Punta Arenas,

The last annular solar eclipse occurred on June 21, 2020, and was visible in Africa, Asia and southeastern Europe. The next one after tomorrow’s will occur on Oct. 14, 2023, and will be visible in Central and South America and the western U.S.

To prevent eye damage, precautions must be taken when viewing the sun. Those who lack special eclipse glasses can safely view an eclipse indirectly by using do-it-yourself equipment like a homemade pinhole camera or a colander to project the image of the eclipse onto another surface. The Time and Date website will live-stream the eclipse.