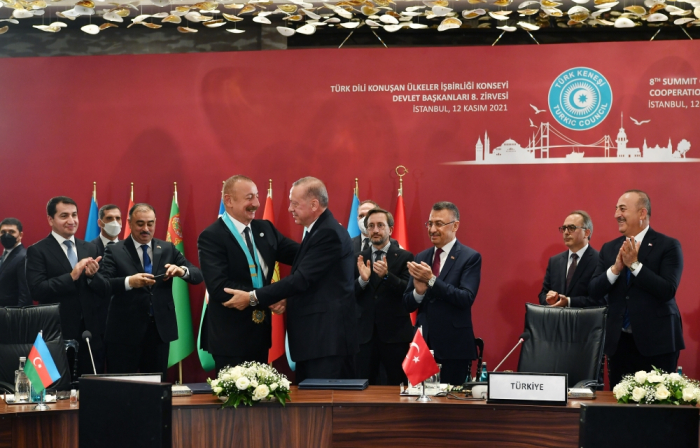 Azerbaijani President has been awarded the Supreme Order of Turkic World, AzVision.az reports.

Turkish President Recep Tayyip Erdogan has presented the Supreme Order to Azerbaijani President Ilham Aliyev at the VIII Summit of the Heads of State of the Turkic Council in Istanbul.

Turkic Council Chairmanship has passed from Azerbaijan to Turkey.

Today, at the VIII Summit of the Heads of State of the Turkic Council in Istanbul, Turkey was announced chair of the organization.

Note that Azerbaijan chaired the Turkish Council in 2019-2021.

The decision of the Council of the Heads of Turkic-Speaking States says in this connection: “In recognition of the historic victory that ensured the liberation of the territories of the Republic of Azerbaijan and the restoration of its territorial integrity under the leadership of His Excellency Ilham Aliyev, the President of the Republic of Azerbaijan, the Commander-in-Chief, which significantly contributed to the Turkic unity and paved the way to achieving enduring peace and stability in the region, the Council of Heads of State, upon the proposal of the President of the Republic of Turkey, His Excellency Recep Tayyip Erdogan, hereby decided to award with great honor His Excellency Ilham Aliyev with the “Supreme Order of Turkic World”.

Under your resolute leadership, the occupation of Karabakh, which lasted about 30 years, was ended in in a matter of 44 days. This is of great importance not only for our Azerbaijani brothers, but also for the entire Turkic world.

As a result of the Patriotic War, UN Security Council resolutions that were not implemented for years have finally been implemented. In this way, Azerbaijan has inscribed a message of justice in the memory of the international community.

The re-establishment of Azerbaijan's territorial integrity has expanded the unity and equality of the Turkic world. Kharibulbul, which is a symbol of the freedom of Karabakh, was the herald of Victory for the Turkic world.

The Karabakh Victory not only liberated the occupied territories, but also paved the way for lasting peace, stability and cooperation in our region.

Taking this opportunity, I am deeply pleased to present the Supreme Order of the Turkic World to my dear brother Ilham Aliyev. I remember with gratitude and respect our heroes who rose to the peak of martyrdom on the path to freedom. 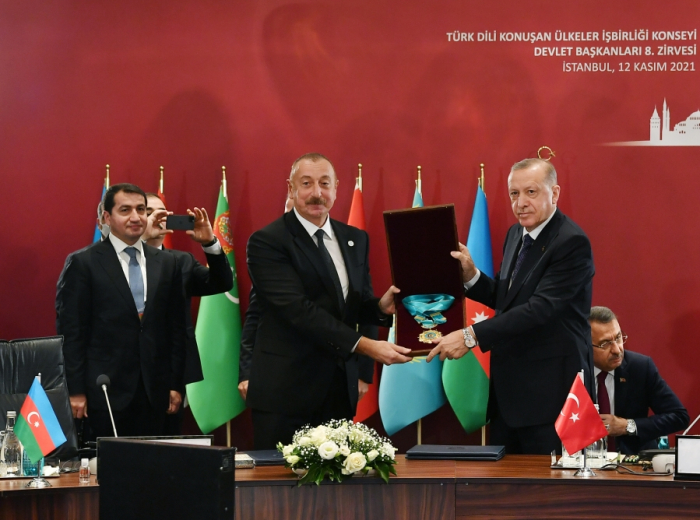 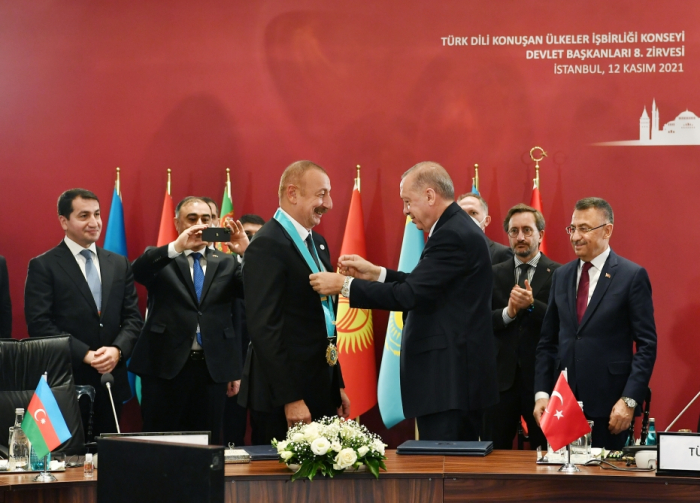