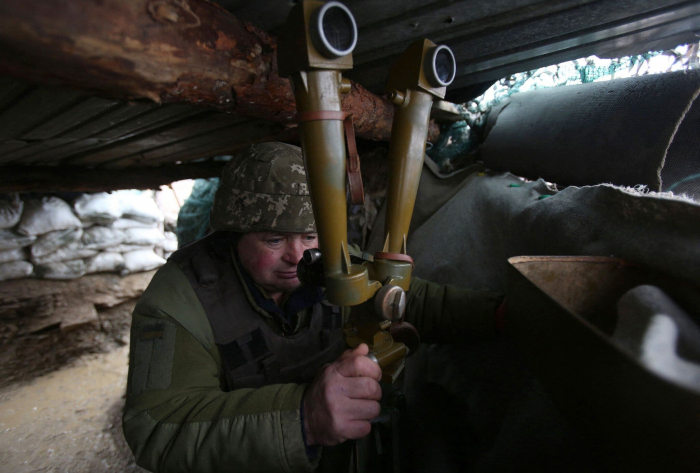 The contradictory, sometimes menacing messages from the Kremlin have stumped Western officials and Russia experts, showing the Russian leader’s desire to keep his rivals on edge.

President Vladimir V. Putin of Russia has spent months massing close to 100,000 troops near the Ukraine border. But Moscow says it has no intention of invading.

What is Russia’s next move? No one knows, except perhaps Mr. Putin. And that is by design.

The mystery surrounding the Russian leader’s intentions was thick as fog again this week, after a top Russian diplomat delivered a series of seemingly contradictory messages upon emerging from two days of high-stakes security talks with the United States.

Moments after declaring the talks “deep’’ and “concrete,’’ Deputy Foreign Minister Sergei A. Ryabkov warned that failure to meet Russia’s demands could put the “security of the whole European continent” at risk.

The gyrating, often ominous positions helped stump even some of those who make a living from decoding Mr. Putin’s intentions.

“The expert opinion that I can authoritatively declare is: Who the heck knows?” Fyodor Lukyanov, a prominent Russian foreign-policy analyst who heads a council that advises the Kremlin, said in a telephone interview.

Analysts said that not even members of Mr. Putin’s inner circle — let alone Mr. Ryabkov, who led Russia’s delegation at this week’s Geneva talks — were likely to know how seriously Mr. Putin is contemplating full-scale war with Ukraine. Nor would they know what American concessions he is prepared to accept in order to defuse the crisis.

Instead, Mr. Putin is likely not even to have made a decision, according to Russian analysts as well as American officials. And he is relishing keeping the West on edge.

“What matters is results,” Mr. Putin’s spokesman, Dmitri S. Peskov, told reporters on Tuesday, maintaining the suspense. “For now, there is nothing to say about any results.”

The talks continue on Wednesday, when Russian officials will meet representatives of the United States and its NATO allies in Brussels, and on Thursday at a gathering of the Organization for Security and Cooperation in Europe, a 57-nation group that includes Ukraine as well as Russia and the United States.

After that, Mr. Peskov said, Russia would decide “whether it makes sense” to move forward with diplomacy.

Mr. Putin’s brinkmanship of recent months is a case study in his ability to use tension and unpredictability to seek high returns with what may seem like a weak geopolitical hand. Struggling with a stagnant economy and tattered alliances, Russia is also dealing with volatile situations on at least four borders — with Belarus, Kazakhstan, Ukraine and the Southern Caucasus.

For years, Mr. Putin has fumed over NATO’s expansion eastward and American support for pro-Western sentiment in Ukraine; now, by creating a new security crisis that threatens to complicate President Biden’s agenda, he has succeeded in getting the issue to the forefront in Washington.

“For the first time in 30 years, the United States has agreed to discuss issues that it was impossible to discuss even a year ago,” said Tatiana Stanovaya, the founder of a political analysis firm, R.Politik.

Mr. Ryabkov, for instance, told reporters that he was making no ultimatums and foresaw no “deal breaker.’’ But he added that it was “absolutely mandatory” that the United States guarantee that Ukraine would never join NATO.

He said Russia was imposing no specific timeline, but that it needed a “fast response” to its demands. And while he said there was “no reason to fear an escalation scenario” in Ukraine, he warned that the West still failed to grasp how dangerous it would be to rebuff Russia’s demands.

The contradictory messaging continued on Tuesday when the Kremlin’s spokesman, Mr. Peskov, countered any positive assessments Mr. Ryabkov might have offered the day before. “For now, we do not see any substantive reason for optimism,” he said in his daily conference call with reporters.

The problem with Mr. Putin’s approach is that it gives his diplomats next to no flexibility to negotiate on Russia’s behalf, and sometimes leaves them struggling to maintain a coherent message. Ms. Stanovaya warned that even if diplomats did reach some kind of deal, hawks in Moscow who have more of Mr. Putin’s ear could soon help derail it.

Analysts noted that Mr. Ryabkov, from the diplomatic side, most likely did not even know what military options the Kremlin was considering. The virus-free cocoon Mr. Putin has tried to establish around himself has meant that even confidants are forced to spend days in quarantine before being allowed into the same room with him, further reducing his connections with the outside world.

“No one knows with 100 percent certainty whether Putin is ready for war, or whether this is a bluff or not,” Ms. Stanovaya said.

While Mr. Ryabkov and other Russian officials have denied that Russia plans to invade Ukraine, Mr. Putin himself, at two news conferences in December, did not offer such a denial. Instead, he has warned of an unspecified “military-technical response” if Russia does not get what it wants.

Since the dissolution of the Soviet Union, more than a dozen formerly Communist-ruled countries of Central and Eastern Europe have joined NATO. In 2008, NATO declared that the former Soviet republics of Georgia and Ukraine would become members, though there is little chance that they would qualify for years to come.

A brewing conflict. Antagonism between Ukraine and Russia has been simmering since 2014, when the Russian military crossed into Ukrainian territory, annexing Crimea and whipping up a rebellion in the east. A tenuous cease-fire was reached in 2015, but peace has been elusive.

A spike in hostilities. Russia has recently been building up forces near its border with Ukraine, and the Kremlin’s rhetoric toward its neighbor has hardened. Concern grew in late October, when Ukraine used an armed drone to attack a howitzer operated by Russian-backed separatists.

Ominous warnings. Russia called the strike a destabilizing act that violated the cease-fire agreement, raising fears of a new intervention in Ukraine that could draw the United States and Europe into a new phase of the conflict.

The Kremlin’s position. President Vladimir V. Putin of Russia, who has increasingly portrayed NATO’s eastward expansion as an existential threat to his country, said that Moscow’s military buildup was a response to Ukraine’s deepening partnership with the alliance.

A measured approach. President Biden has said he is seeking a stable relationship with Russia, though tension has been rising. So far, his administration is focusing on maintaining a dialogue with Moscow, while seeking to develop deterrence measures in concert with European countries.

“We need long-term, legally binding guarantees” that would roll back the NATO presence in Eastern Europe, Mr. Putin said in December. He added that while the United States has exited treaties in the past, “we need at least something, at least a legally binding agreement rather than just verbal assurances.”

While Mr. Putin may have succeeded in getting the U.S. to agree to talk — even though Moscow’s demands appeared to be nonstarters — Ms. Stanovaya and others warned that at this point, talks alone are not enough for him.

Emboldened, he sees Mr. Biden as a man who may be willing to make a deal — and that Mr. Biden, as a veteran of the Cold War, may possess a respect for power diplomacy with Moscow that younger American politicians do not.

“He assumes that the Americans will pay attention only to that which concretely, immediately threatens them,” Dmitri Trenin, director of the Carnegie Moscow Center think tank, said of the Russian president. “He uses unpredictability, he uses tension, he uses threats.”

As best analysts can tell, it is the demand that NATO offer some kind of formal assurances not to expand eastward and to cease military cooperation with Ukraine that is now most important for Mr. Putin. The American offer in Monday’s discussions to negotiate missile placement and military exercises in Europe is also of interest to Russia, but Mr. Ryabkov indicated that these issues are a lower priority.

NATO has repeatedly ruled out the idea that it would allow any other country to veto who can and cannot be in the alliance, creating what appears to be an impasse. Still, Mr. Lukyanov, the prominent Russian analyst, said the fact that the talks did not immediately collapse means that both sides may see some path — currently invisible to the outside world — to achieve a workable result.

As for what Russia does next, Mr. Lukyanov said that this would be solely up to Mr. Putin, who exerts a monopoly on foreign-policy decision-making without recent precedent in Russia. Unlike Soviet-era leaders, Mr. Putin has no “Politburo” of senior officials making collective decisions.

Mr. Lukyanov said no individuals could be seen as directly influencing Mr. Putin.

“He receives this or that information,” Mr. Lukyanov said. “Those who provide it don’t exert their own influence and don’t know how it’s going to work out.”