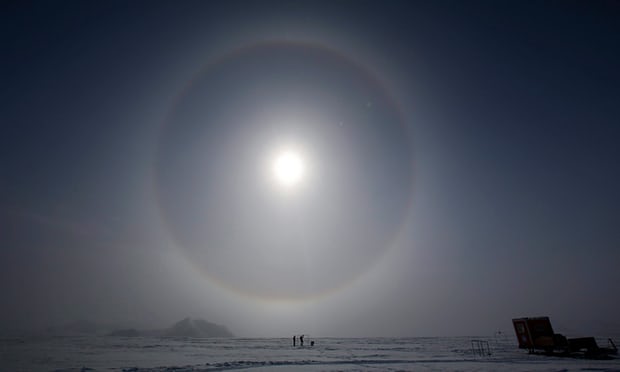 A sharp and mysterious rise in emissions of a key ozone-destroying chemical has been detected by scientists, despite its production being banned around the world.

Unless the culprit is found and stopped, the recovery of the ozone layer, which protects life on Earth from damaging UV radiation, could be delayed by a decade. The source of the new emissions has been tracked to east Asia, but finding a more precise location requires further investigation.

CFC chemicals were used in making foams for furniture and buildings, in aerosols and as refrigerants. But they were banned under the global Montreal protocol after the discovery of the ozone hole over Antarctica in the 1980s. Since 2007, there has been essentially zero reported production of CFC-11, the second most damaging of all CFCs.

The rise in CFC-11 was revealed by Stephen Montzka, at the US National Oceanic and Atmospheric Administration (NOAA) in Colorado, and colleagues who monitor chemicals in the atmosphere. “I have been doing this for 27 years and this is the most surprising thing I’ve ever seen,” he said. “I was just shocked by it.”

“We are acting as detectives of the atmosphere, trying to understand what is happening and why,” Montzka said. “When things go awry, we raise a flag.”

Erik Solheim, head of UN Environment, said: “If these emissions continue unabated, they have the potential to slow down the recovery of the ozone layer. It’s therefore critical that we identify the precise causes of these emissions and take the necessary action.”

CFCs used in buildings and appliances before the ban came into force still leak into the air today. The rate of leakage was declining steadily until 2013, when an abrupt slowing of the decline was detected at research stations from Greenland to the South Pole.

Scientists then embarked on an investigation, published in the journal Nature, to find out the cause. The detective work began by assessing whether there had been changes in how the atmosphere distributes and destroys CFC-11 that could explain the changed measurements. But this factor was mostly ruled out and in the most recent data – 2017 – it appears to have played no role at all.

Next, the researchers looked at whether the release of CFC from older materials could have doubled, as required to explain the data. “But we don’t know of any folks who are destroying buildings at a much more dramatic rate than they were before,” said Montzka.

Lastly, the team considered whether the new CFC-11 was being produced as a by-product of some other chemical manufacturing process. But they ruled this out too, as the quantities involved are too high, representing a 25% rise in global emissions.

“You are left with, boy, it really looks like somebody is making it new,” said Montzka, who noted that the less damaging replacement for CFC-11 is more expensive to make.

“If the increased emissions were to go away [soon], it’s influence on the recovery date for the ozone layer would be minor,” he said. “If it doesn’t go away, there could be a 10-year delay, and if it continued to increase, the delay would be even longer.” The last option is a possibility, as if the new CFC-11 is being used in foams, then only a small fraction will have made it to the atmosphere so far and more could leak out for many years into the future.

Michaela Hegglin, at the University of Reading, UK, and not part of the research team said researchers had taken rigorous steps to rule out alternative explanations for the rise in CFC-11 when reaching their conclusion that new production must be occurring.

She said: “The study highlights that environmental regulations cannot be taken for granted and must be safe-guarded, and that monitoring is required to ensure compliance.” Prof Piers Forster, at the University of Leeds, UK, said: “This new study is atmospheric detective work at its finest.”

Paul Young, at Lancaster University, UK, said: “The Montreal Protocol has been rightly hailed as our most successful international environmental treaty, so the suggestion that there are possibly continued, unreported emissions of CFCs is certainly troubling and needs further investigation.”

Montzka said the world’s nations are committed to its enforcement. “I have a feeling that we will find out fairly quickly what exactly is going on and that the situation will be remedied,” he said. Even just the publicity about the new CFC-11 production could lead to its shutdown, he said: “Somebody who was maybe doing it purposefully will realise – oh, someone is paying attention – and stop doing it.”