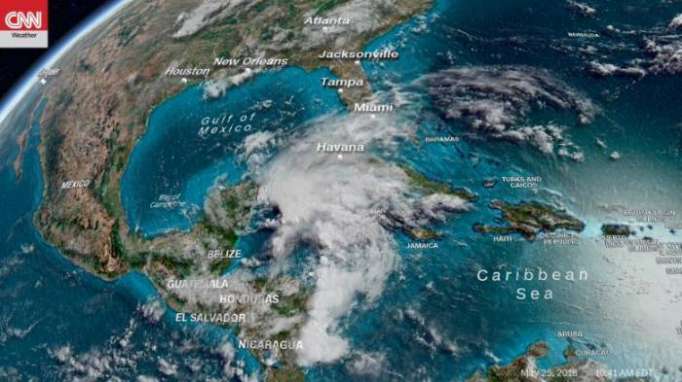 Subtropical storm Alberto is brewing in the Caribbean Sea and is set to bring heavy rainfall and flash floods to Florida and the US Gulf Coast this weekend, just days before hurricane season begins.

According to the National Hurricane Centre, Subtropical Storm Alberto has formed near Mexico's Yucatan Peninsula and is set to bring heavy rainfall to the state of Florida and the northeastern Gulf Coast.

This is the first named storm of the 2018 hurricane season, which begins on June 1.

Meteorologist Glenn Richards: ”It's not a true tropical system.

“It doesn't have a real warm core, it's not taking energy from the warm waters, but it does mean that this system is producing winds of tropical storm force, but it's very near the centre.”

Mr Richards added: "It is forecast to get stronger, as it works its way to the north.

Flood warnings have been issued from Alabama to Georgia.

The National Weather Service said a flash flood watch will be in effect fro, Saturday evening until Tuesday evening for southwestern Alabama, southeastern Mississippi, and the western Florida Panhandle.

They warned: “The threat of rip currents will steadily increase along the Gulf Coast from Florida westward to Louisiana over the Memorial Day weekend.”

Alberto is moving slowly over the northwestern Caribbean Sea.

It is expected to strengthen over the next 48 hours as it heads to the Gulf of Mexico.

US National Hurricane Centre said the storm currently has winds of 40mph (65kph), but this is expected to rise significantly.

It is reportedly moving north-northeast at 6mph (9kph).

A hotel owner in Panama City Beach, Florida has said people are cancelling because of the weather and room reservations are down by 20 per cent.