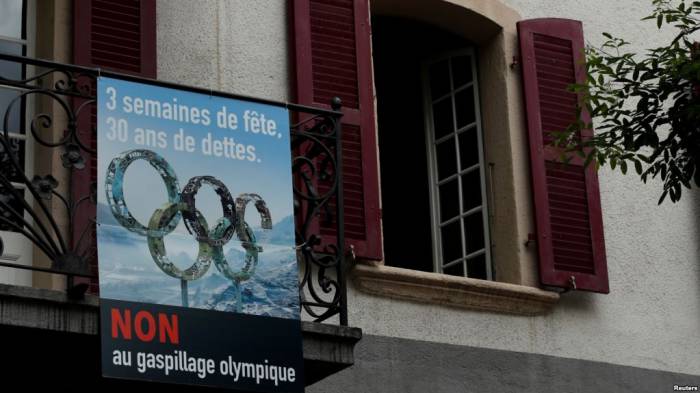 They rejected the plan which would have cost 100 million Swiss francs (100 million U.S. dollars) of their tax money going toward infrastructure and security, reported RTS, the Swiss national broadcaster.

Sion 2026 was the latest attempt to bring the Olympic Games to Switzerland for the first time since St. Moritz in 1948.

Citizens in the largest towns in the region, including Sion which would have been the host city, rejected the plan.

Voters also said no in some of the largest ski areas in the canton, including Zermatt and Nendaz, which is linked to the fashionable resort of Verbier.

Crans-Montana and Saas-Fee were two mountain resorts where voters approved the bid, in an election where the overall turnout in the canton was 62.6 percent.

Those opposed to the Sion 2026 bid argued that the Games would go over budget, as is often the case, and that Valais is a financially weak canton in the Swiss Alps, Swissinfo, the website of the national broadcaster reported.

Those opposed said the canton's coffers would be better allocated to roads, hospitals and social services.

Supporters of Sion hosting the games said the Olympics would have given the region more visibility, develop tourism, and generate momentum.

The Swiss Tourism Federation issued a statement regretting the decision, saying that the games would have put the spotlight on Switzerland, creating thousands of jobs, and turnover of around 5 billion Swiss francs (5 billion U.S. dollars).

The International Olympic Committee (IOC) was due to choose the host city in September 2019 from six cities that were also vying for the 2026 games - Canada's Calgary, Austria's Graz, the Swedish capital Stockholm, Turkey's Erzurum, Japan's Sapporo and an Italian bid involving Cortina d'Ampezzo, Milan and Turin.