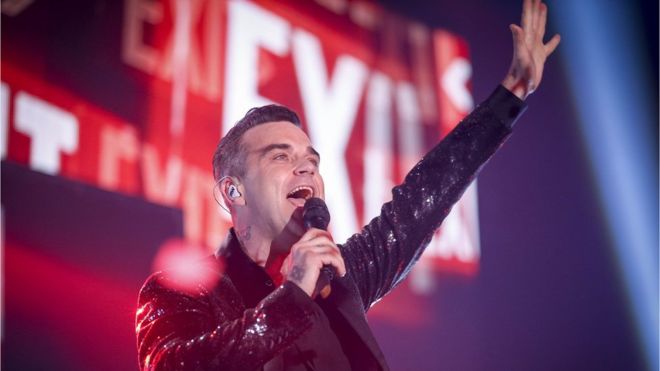 Robbie Williams is to open the 2018 World Cup in Moscow - just two years after Russian newspapers said he should be banned from performing there, BBC reported.

The pop star, whose hits include Angels and Let Me Entertain You, will headline the tournament's opening ceremony at the Luzhniki Stadium on Thursday.

He will perform alongside Russian soprano Aida Garifullina, just half an hour before the first match kicks off.

But he will presumably exclude the song Party Like A Russian from his setlist.

The track, which portrays Russia's elite as unsmiling, super-rich autocrats who party on superyachts and hire thugs to settle disputes by putting "the boots in", was roundly criticised in Russia upon its release in 2016.

A number of Russian media outlets criticised Williams' "offensive" stereotyping, while others predicted he would never play in the country again.

"This will upset those who previously wanted him to perform, who brought him to Moscow, or wanted him to perform at their events abroad," said Sergey Knyazev, a member of the National Association of Event Organizers, in an interview with the Pro-Kremlin channel Life News.

"None of these people, big corporations or individuals who want him at their event, want to end up as the butt of this joke. It is a joke about 'new Russians,'" he added.

But the storm seems to have blown over.

Earlier this year, Williams was booked to perform for Russian billionaire and Arsenal shareholder Alisher Usmanov, at a glitzy after-hours party at Russia's annual economic forum in St Petersburg.

And the 44-year-old will now perform in front of Russian President Vladimir Putin as the World Cup gets under way.

Two-time World Cup winner Ronaldo will also take part in the ceremony, which will be broadcast live around the world immediately before the opening match between Russia and Saudi Arabia commences at 16:00 BST on Thursday.

"I'm so happy and excited to be going back to Russia for such a unique performance," said Williams in a statement announcing the performance, which will be shown on ITV in the UK.

"I've done a lot in my career, and opening the Fifa World Cup to 80,000 football fans in the stadium and many millions all over the world is a boyhood dream."

The charity event, which raises money for Unicef, was co-founded by the star in 2006 and has raised more than £24 million for children in danger around the world.