How the quest for the 'perfect blue' changed art forever 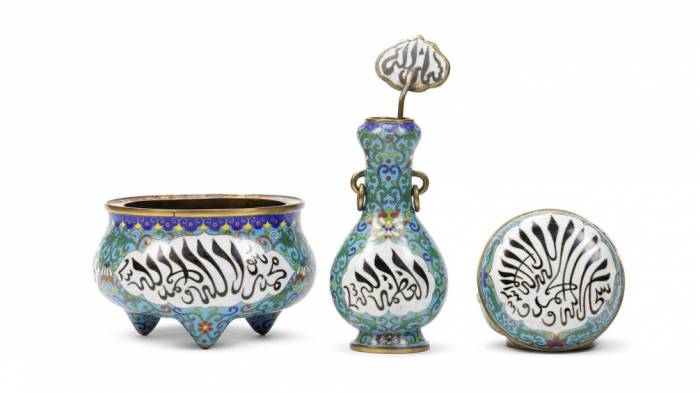 The color blue has had a remarkable impact on the history of world trade. Rarely occurring in the natural world, blue pigments were, for centuries, highly sought-after by craftsmen and merchants.

This quest for the perfect blue has also transformed artistic traditions, from modern painting and jewelry to Turkish tilework, Persian glassware and Ming dynasty pottery.

It's a story explored in "The Blue Road," a Hong Kong exhibition whose title plays on the name given to ancient trade routes now known as the Silk Road. 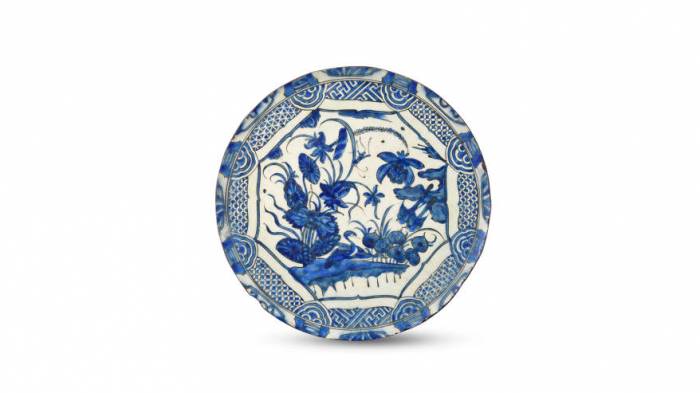 A blue and white dish produced in 17th century Persia depicts diving waterfowl amid plants and flowers. It is an example of "fritware," a type of pottery made from powdered glass. Credit: Liang Yi Museum

Among the collection's many notable artifacts is a 17th-century blue-and-white dish depicting diving waterfowl amid plants and flowers. It's a style that has inspired innumerable imitations, and is now featured on everything from blue willow tea towels to porcelain door knobs.

But while the item's blue-and-white coloring is most commonly associated with imperial China, the dish was in fact produced in Persia. It's a gleaming illustration of how trade evolved and influenced the culture of both empires.

"Like other Safavid (Persian) blue and white examples, many features found on this dish are derived from contemporary Chinese prototypes," said Yuka Kadoi, the curator of the exhibition, which is housed at Hong Kong's Liang Yi Museum.

China started importing cobalt, the element used to make early blue pigment, from Persia in the 14th century. But Ming-era Chinese elites initially frowned upon the blue and white ceramics now emblematic of their dynasty.

Kadoi notes that the Early Ming connoisseur Cao Zhao deemed them "vulgar." Emphasis was given to subtle glaze effects and graceful shapes, with blue designs judged to be too ornamental.

But with its associations of rarity and exoticism, cobalt blue soon became popular. Before long, factories at Jingdezhen, the birthplace of China's "white gold," were producing blue and white ceramics for domestic and international markets.

A pair of Chinese-made porcelain slippers from the 18th century. While serving as objets d'art, the shoes would have been used in semi-public bathhouses. 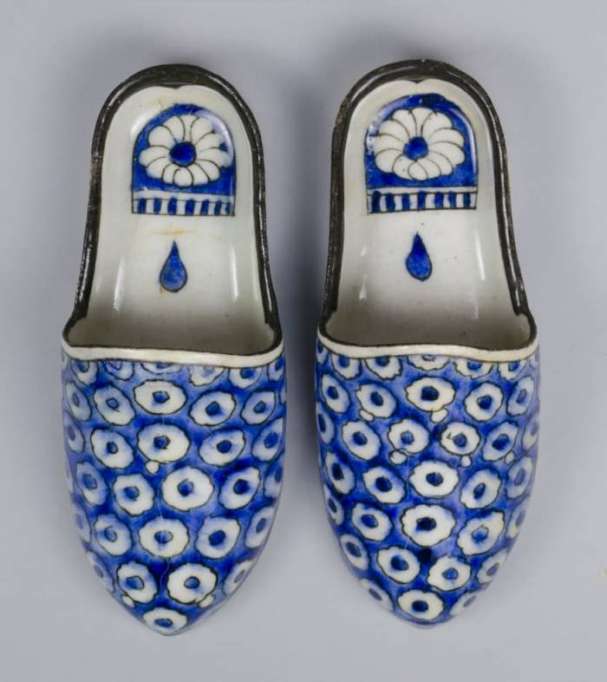 A pair of Chinese-made porcelain slippers from the 18th century. While serving as objets d'art, the shoes would have been used in semi-public bathhouses. Credit: Doris Duke Foundation for Islamic Art, Honolulu/David Franzen

Among their customers were the Persians, admirers of the empire's luminous porcelain. They had access to cobalt, but were unable to produce the high-fired pottery themselves.

As such, the Persians began commissioning and importing blue and white ceramics from Chinese merchants -- meaning that China was buying the material, using it to make ceramics, and then sending them back at a profit.

Eventually, Persia started producing its own imitations of Chinese ceramics in the form of "fritware," a type of pottery made from powdered glass (of which the 17th-century dish is an example). In turn, the Persians themselves exported blue-and-white items -- this time to Europe.

"This change mainly occurred in the 16th century with the European exploration of Asia," said Kadoi. "Persian imitations of Chinese ceramics were made as cheap substitutes of porcelain for the European market.

"The birth of blue culture was a fascinating blend of different traditions coming not only from the Persian heartlands," she added, "but also, West Asia, East Asia, South Asia and Europe."

The blue-and-white aesthetic also greatly influenced the artistic traditions of Persia's neighboring empire, the Ottomans. Chinese ceramics had been admired, collected and emulated in the Islamic world since the 14th century, but this was especially so in the Ottoman court.

This is apparent in the region's "Iznik" tilework, which takes its name from a district in what is now northwest Turkey, an area famous for its ceramics.

"During the Ottoman Empire our (Turkish) culture was influenced by the Chinese," said Mehmet Gursoy, co-creator of the exhibition, "Contemporary Blue-and-White: Turkish Ceramics by Mehmet Gursoy and Nida Olcar," at the University Museum and Art Gallery in Hong Kong.

A contemporary interpretation of "Iznik" tilework by Turkish ceramics artist Mehmet Gursoy, who nods to the tradition of his craft through Chinese motifs like cranes and lotus flowers. 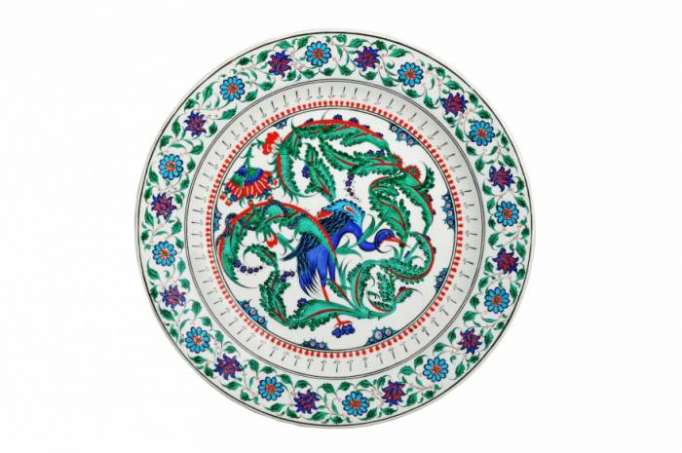 A contemporary interpretation of "Iznik" tilework by Turkish ceramics artist Mehmet Gursoy, who nods to the tradition of his craft through Chinese motifs like cranes and lotus flowers. Credit: University Museum and Art Gallery, The University of Hong Kong

Production of Iznik tilework, whose vibrant blues adorn many of Turkey's mosques, went into decline in the 17th century. But ceramics artist Mehmet Gursoy has helped revive the art. He has transformed its palette with new shades of green and coral red and expanded the range of its designs and forms, imbuing it with a modern aesthetic.

Gursoy's use of Chinese motifs, like cranes and lotus flowers, nod to the traditions of the craft. One of the items on display at his Hong Kong exhibition is a white ceramic dish emblazoned with a richly plumed blue crane peering through swags of green foliage.

"Chinese artists were the first to use these flowers, and that's why I give them such importance," said Gursoy, who was declared a UNESCO Living National Treasure in 2010. "We go back to the aesthetic birthplace."

China's blue-and-white style would also transform ceramics in Western Europe and elsewhere, according to Gauvin Bailey, a professor of art history at Queen's University, Canada.

"The cobalt blue of Chinese Jingdezhen porcelain also drove trade worldwide, from Annam (Vietnam) to Amsterdam," he said in a phone interview. "But its high price similarly inspired local craftsmen to create cheaper alternatives, especially non-porcelain pottery and tiles with weaker cobalt, as in Southeast Asia or New Spain (Mexico)."

During the same period that blue was changing the world's ceramics, it was also transforming the history of painting.

In the Middle Ages a high-quality, vividly blue pigment started to reach Europe along overland trade routes. This colorant was made from the semi-precious stone lapis lazuli, which was mined in Afghanistan. It arrived via Venice, acquired the name "ultramarine" and changed the course of European painting. 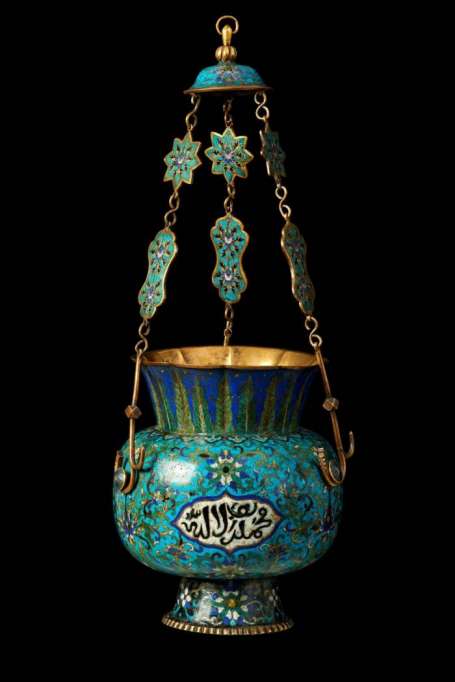 Dating back to the 19th century, this hanging lamp combines the Middle East's artistic traditions with those of China, where it was produced. Credit: The David Collection, Copenhagen/Pernille Klemp

Venice, Florence and other centers of Italian painting created a kind of hierarchy of colors, said Bailey, with blue near the top because of its expense and limited supply.

"As a result, blue pigments were used for the drapery of the most exalted figures in a given painting, such as the mantle of the Virgin Mary," he added.

The works of painters such as Titian and Tintoretto epitomize the use of blue during the Renaissance. In Venice, availability of blue helped facilitate the development of a tradition of "colorito" (colorism), the layering and blending of colors to create rich atmospheric naturalism in a landscape, said Bailey.

"Blue played a major role in this development," he added.

Used for storing and burning incense, this bronze altar set is inscribed with a stylized form of Arabic developed by Chinese Muslims. 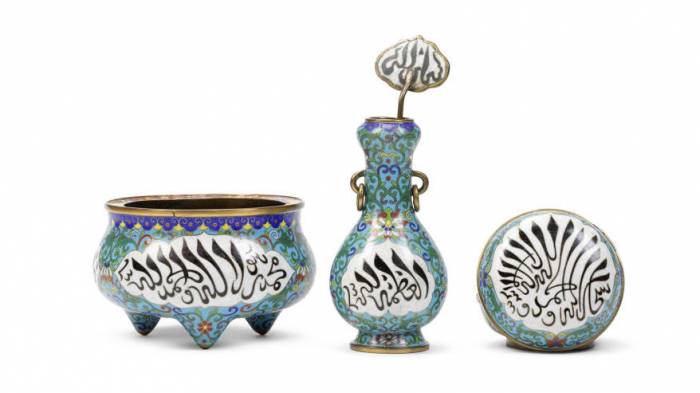 Other nations like Portugal sought cheaper domestic options, and even appointed royal officials to oversee the mining of blue pigment, according to Bailey. The search for easier, less expensive colorants led, ultimately, to the discovery of new blues. This includes "Prussian blue" in the 18th century, and, at the beginning of the 19th century, a purer alumina-based cobalt blue -- both of which were used by Van Gogh, among others.

In 2009, a chemist in Oregon said he had discovered a new shade, YInMn blue, touted as "the first new blue pigment in over 200 years, since Cobalt blue." And so, perhaps, the search for the perfect blue continues.