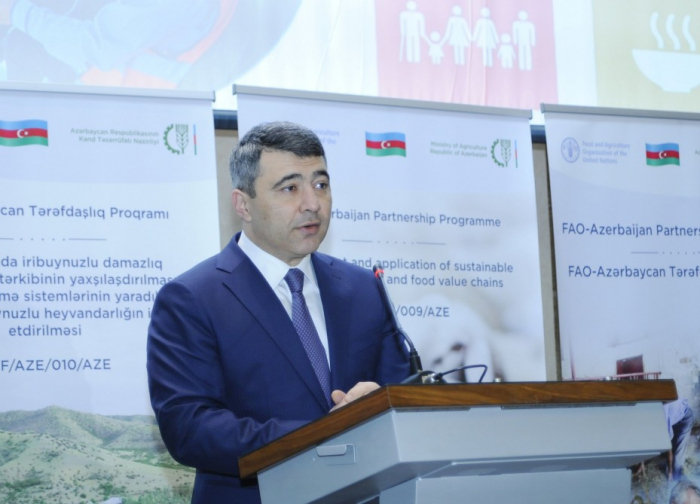 Baku hosted an event dedicated to the launch of a partnership program with the Food and Agriculture Organization of the United Nations (FAO).

The event was co-organized by the Food and Agriculture Organization of the United Nations (FAO) and the Azerbaijan’s Ministry of Agriculture.

“Thus, within the framework of this program, Azerbaijan has become not only a beneficiary, but also simultaneously one of the donor countries financing the projects. I believe that such a model of cooperation can be a positive example for other FAO member countries,” the Minister mentioned.

He underlined that Azerbaijan and FAO implemented 53 projects in 1995-2018, in addition, currently, the implementation of another six projects are underway, and four are planned to commence in the near future.

Speaking at the event, FAO Assistant Director-General and Regional Representative for Europe and Central Asia Vladimir Rakhmanin noted that the partnership between Azerbaijan and UN FAO has successfully developed over the past 20 years paving the way to the opening of the FAO Partnership and Liaison Office in Baku.

In May 2015, during FAO Director-General’s visit to the country, an agreement on the establishment of FAO-Azerbaijan Partnership Programme (FAPP) was signed and a US$10 million cooperation framework was set up for 2016-2020. The Government of Azerbaijan has subsequently ratified the agreement and the Operational Framework for the FAPP was approved on December 2016.