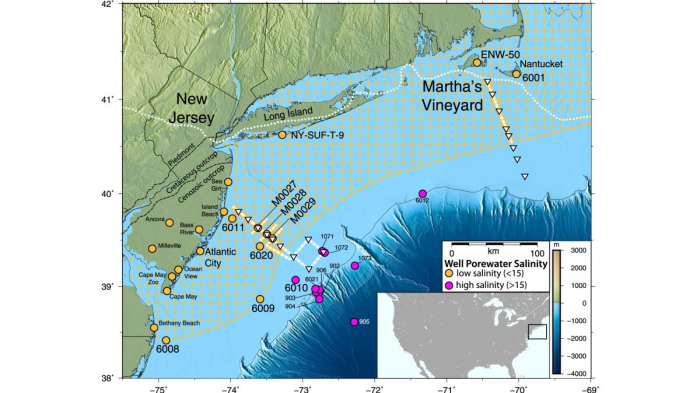 A gigantic, freshwater reservoir has been discovered beneath the Atlantic Ocean, stretching from Massachusetts to New Jersey, according to a new study.

Scientists at Columbia University made the discovery during a multi-year survey of the sub-seafloor off the U.S. Northeast coast.

The study, published in the journal Scientific Reports on June 18 says the aquifer stretches from the shore at least from Massachusetts to New Jersey and extends more-or-less continually out about 50 miles to the edge of the continental shelf.

If it were on the surface, researchers say it would create a lake covering about 15,000 square miles.

“Our data suggest a continuous submarine aquifer system spans at least 350 km of the U.S. Atlantic coast and contains about 2800 km3 of low-salinity groundwater,” the study reads.

According to researchers, the aquifer was found trapped in porous sediments lying beneath the ocean.

Receivers were dropped to the seafloor to measure electromagnetic fields below, and the degree to which solar winds and lightning strikes and other natural disruptions resonated through them.

The team also towed an apparatus behind the ship which emitted artificial electromagnetic pulses and recorded the reactions from the sub-seafloor.

Researchers say salt water is a better conductor of electromagnetic waves than fresh water, so the freshwater stood out as a band of low conductance.

“We knew there was fresh water down there in isolated places, but we did not know the extent or geometry,” Chloe Gustafson, lead author and PhD candidate at Columbia University’s Lamont-Doherty Earth Observatory said in a statement. “It could turn out to be an important resource in other parts of the world.”

A potential resource for freshwater

Researchers say the finding suggests that other aquifers may lie off many other coasts worldwide, and could potentially provide desperately needed water or in areas that are in danger of running out.

According to the study’s co-author, Kerry Key, if water from the aquifer were withdrawn, it would need to be desalinated for most uses.

“We probably don’t need to do that in this region, but if we can show there are large aquifers in other regions, that might potentially represent a resource,” he said in a statement.

Researchers found the aquifer is freshest near the shore and becomes saltier further out, suggesting it mixes gradually with ocean water over time.

“If we consider the potential northeast and southwest extensions beyond our profiles, there may be several times more groundwater underlying the northeast portion of the U.S. Atlantic continental shelf, representing a freshwater resource that rivals the largest onshore aquifers,” the study reads.

How did the water get there?

According to researchers, the water probably made its way under the seabed in one of two ways.

Around 15,000 to 20,000 years ago when the ice melted at the end of the last glacial age, sediments formed river deltas on top of the shelf, and fresh water became trapped in scattered pockets as sea levels rose.

This has been the common explanation for fresh “fossil” water found under the ocean until now.

However, researchers say the study’s findings indicate that the aquifer is being fed by subterranean runoff from the land.

As water from water bodies and rainfall percolates through onshore sediments, it is likely pumped seaward by rising and falling pressure tides, Key explained.

According to Key, the team now hopes to expand its surveys.