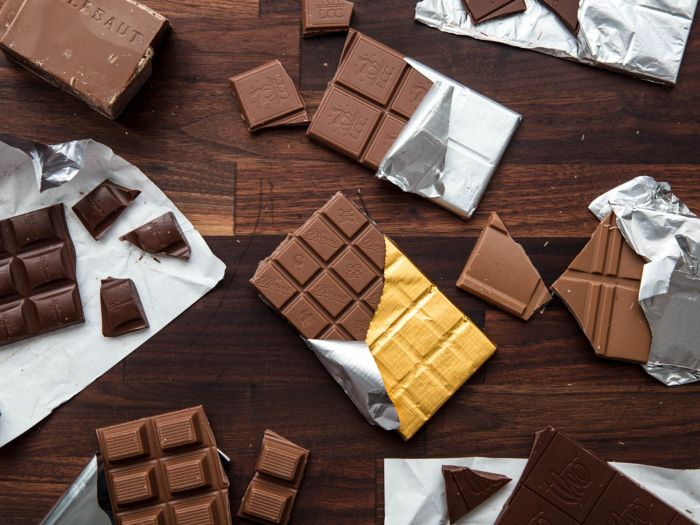 The Pure Nacional tree once at the heart of South America’s chocolate industry was believed to have been lost forever – until it was recently rediscovered by accident.

Travelling to the Marañón Canyon in northern Peru is like stepping back in time. Mud-brick houses dot the hilly landscape. Electricity, which arrived in this area just three years ago, is only available in a few homes, and supply can be inconsistent. It only works about five days a week and you never know which five days these will be. And with few paved roads, residents of this remote region rely on mules and bicycles for transportation.

That the Marañón Canyon has remained relatively untouched by modernity has been a blessing, as it is here that the Pure Nacional tree, which produces some of the world’s rarest cacao, has flourished.

This ancient cacao tree originated in the Amazon jungle and holds the distinction of being the oldest and rarest variety, its existence dating back at least 5,300 years. Between the 17th and 19th Centuries, the Pure Nacional was widely cultivated in Ecuador, where its coveted pods helped fuel what was then the world’s largest supply of cacao. But then disaster struck: disease spread through Ecuador’s cacao forests, decimating the highly susceptible Pure Nacional. Through cross-breeding with hardier cacao varieties, farmers were able to eventually stop the spread of the disease, but the new, cross-bred trees no longer produced the high-quality cacao of the Pure Nacional.

By the early 20th Century, experts declared the Pure Nacional tree extinct, and it was believed that its delectable cacao was lost forever. 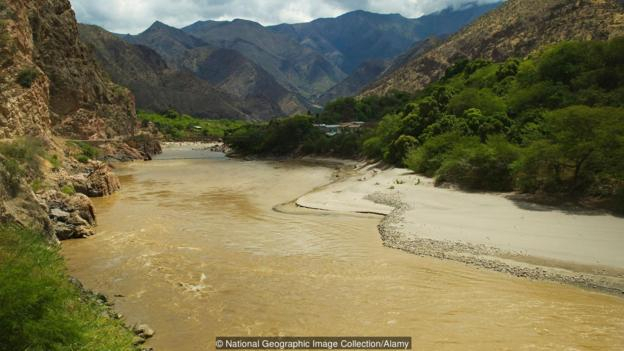 In 2007, two Americans, Dan Pearson and his stepson Brian Horsley, were supplying gear and food to mining companies around the Marañón Canyon in northern Peru near the Ecuador border when they happened upon a strange-looking tree that had football-sized pods growing out of its trunk. Perplexed and unsure what they were looking at, Pearson and Horsley sent several samples to the United States Department of Agriculture (USDA) to get some answers. To everyone’s amazement, the samples were confirmed to belong to the Pure Nacional tree.

Nestled among the jagged Andean peaks, the Marañón River (which happens to be the headwater of the Amazon River) has carved the Marañón Canyon, creating a natural boundary that saved a small group of Pure Nacional trees from disease. Nobody could quite believe that these two men had stumbled upon the long-lost cacao tree. “When they called with genetic test results and asked, ‘Are you sitting down?’ I knew we had found something special,” Pearson said. 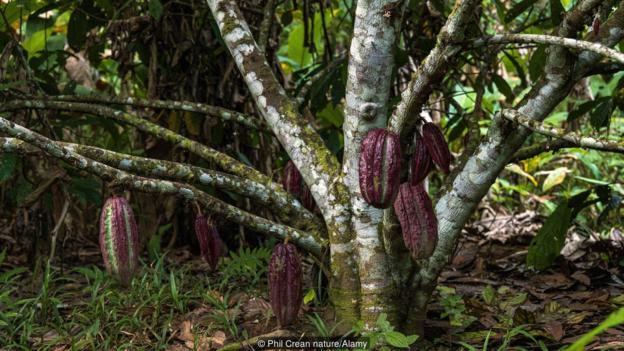 In 2007, Dan Pearson and Brian Horsley happened upon a rare cacao tree believed to have gone extinct in the early 20th Century (Credit: Phil Crean nature/Alamy)

Cacao trees originated in the Amazon rainforest, which stretches across much of modern-day Peru. But unlike the Mayas and Aztecs, who fermented, roasted and ground cacao to make a bitter drink used in religious rituals, Peru’s ancient Incas aren’t thought to have widely consumed it. Sixteenth-Century Spanish missionaries considered the Mayan beverage to be rather loathsome, but when sugar was added to it after it was shipped to Spain, chocolate became a hit the world over and a global industry was born – an industry that for the next few centuries was dominated by chocolate produced with beans of the Pure Nacional..

I knew we had found something special
That’s because, while most cacao tree pods contain only purple beans, the Pure Nacional trees also produce white beans renowned for their fruity, floral flavour and lack of bitterness. Having survived in isolation for a century, the Pure Nacional trees in the Marañón Canyon developed a genetic mutation causing them to produce pods with a significantly higher white bean-to-purple bean ratio than the trees that had been cultivated in Ecuador centuries before. 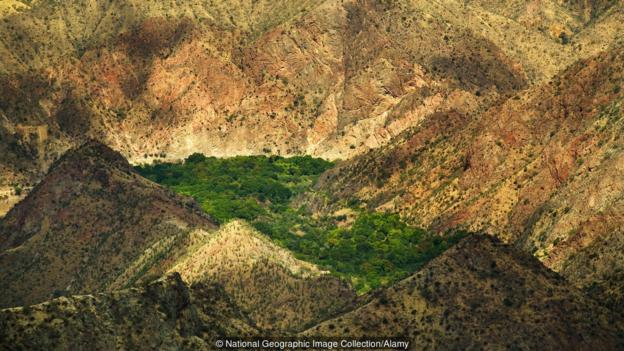 Finding these trees was the beginning of Pearson and Horsley’s journey into the world of chocolate. The tree that Pearson and Horsley stumbled upon still stands on the property of a local farmer named Don Fortunato. Using seedlings from what they now call the “mother tree”, the two men founded Marañón Chocolate and began to propagate the Pure Nacional population in the canyon. Working with local farmers like Fortunato, Pearson and Horsley learned how to care for the trees at their nursery and how to ferment and dry the precious cacao beans once they had been harvested.

Once these steps had been mastered, Pearson then travelled to Switzerland to have the beans made into a one-of-a-kind chocolate by a renowned chocolate maker. This chocolatier, who Pearson prefers not to name, had been recommended to him by Franz Ziegler, an award-winning author and world-renowned pastry chef, and his colleague Paul Edwards of Chef Rubber, a culinary supply company.

“In our combined 50 years of working with chocolate, we have never tasted flavours like this,” Zeigler and Edwards said in a 2011 statement when the chocolate was unveiled at the Institute of Culinary Education (ICE) in the United States. “We had to experience this ourselves so we both travelled to Peru, met the farm families, saw the trees, the white beans and the genetic test and then watched the next evolution in post-harvesting processing that they developed. We saw the past and the future of chocolate.” 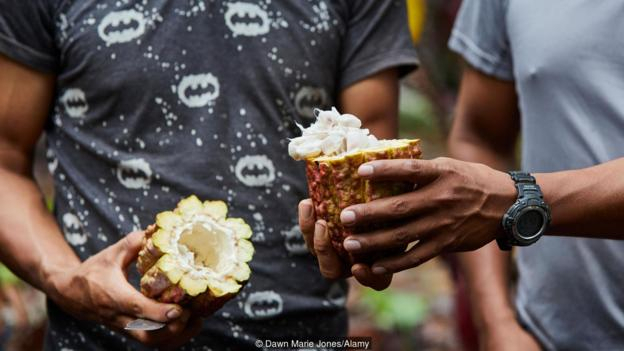 Today, Pearson and Horsley continue to cultivate their Pure Nacional trees and harvest the cacao beans according to local tradition – a process that visitors can witness between mid-January and early June. During harvest season, more than 400 farmers who supply beans to Marañón Chocolate rise at dawn to hand cut the pods from the trees using long bamboo poles with curved blades at their tips. The pods are left unopened until either Pearson or Horsley arrive to inspect the pods and ensure they contain the correct proportion of white beans. The beans are then extracted by hand, and Pearson or Horsley purchase them from the farmers on the spot, paying almost 50% above the local market price to support the farmers.

The harvested beans are carried a few kilometres from the farms to the Marañón Chocolate processing facility, first by burros (small donkeys) and then by motorcycle. They are then dried and fermented before being shipped to the chocolate maker in Switzerland. There, the beans are further processed using an antique conching machine (a machine designed to mix and aerate liquid chocolate) from 1879 to produce the final product: Fortunato No 4. Marañón Chocolate’s signature product is named in honour of Don Fortunato, and because the USDA declared the fourth genetic sample that was sent by Pearson for testing to be the legendary lost cacao.

It's the Rolex of chocolate

Chocolate experts around the world have commended Fortunato No 4 for its rich flavour, smooth texture and lack of bitterness. Swiss pastry chef Roger Von Rotz described it as “the Rolex of chocolate”, while Peruvian chef Gastón Acurio said upon sampling it: “I just tried the best chocolate I’ve had in my whole life.”

The sale of Fortunato No 4 is limited to elite chocolate makers who then mould it into consumer-friendly creations and make it available to buyers through online sales channels or in their local stores. You can acquire chocolate made from Pure Nacional pods from vendors like Moonstruck Chocolate Company in the US, House of Anvers in Australia and Solkiki Chocolatemaker in the UK. 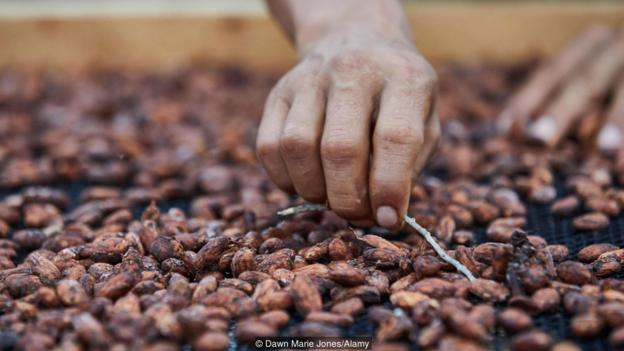 Pearson and Horsley use the Pure Nacional beans to produce their signature chocolate, Fortunato No 4 (Credit: Dawn Marie Jones/Alamy)

To be the home of the world’s rarest chocolate fills the Marañón Canyon community with great pride. Thanks to their unique cacao beans, their stature has increased internationally as a result of the recognition they have received from world-renowned chocolatiers.

Don Fortunato, who collects royalties from sales of Fortunato No 4, is a particularly happy man. “It has helped me financially and it has made me famous,” he said with a proud smile on his face. To this day he continues to care for the Pure Nacional tree on his property, watching over the “mother” of the chocolate that came back from the dead.