The truth behind why zebras have stripes 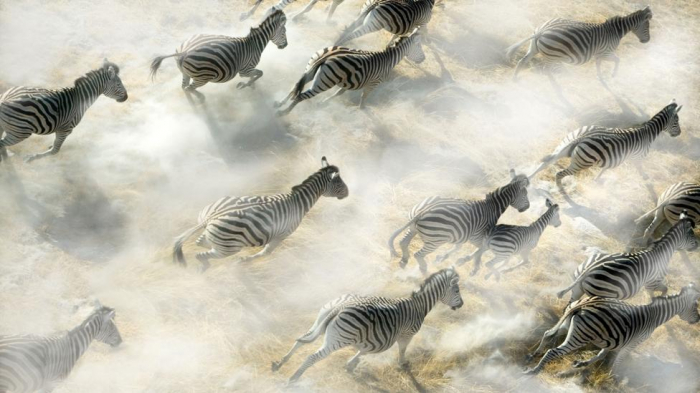 Rudyard Kipling playfully wrote that zebras stripes were due to "the slippery-slidy shadows of the trees" falling on its body but are scientists getting closer to the truth?

In February 2019, at a horse livery yard in the UK, a fascinating experiment took place. A team of evolutionary biologists from the University of California, Davis, and their UK collaborators, investigated why zebras have stripes. In the name of science, they dressed several domestic horses at Hill Livery in zebra-striped coats, and studied them alongside actual zebras. 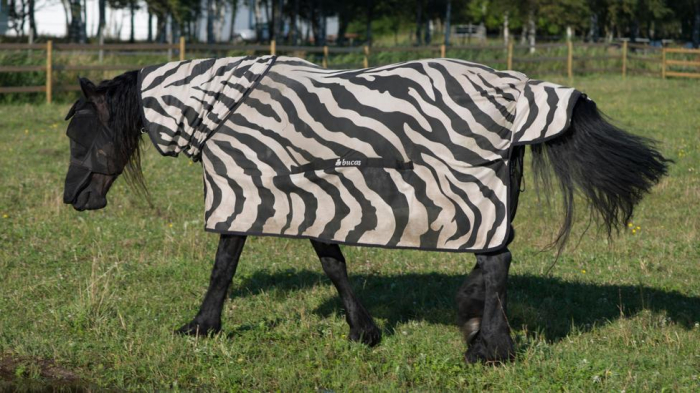 Owner Terri Hill keeps a herd of zebras which she has acquired from zoos across the UK – a collection which stems from Hill’s passion for the conservation of wild equids. Maintaining the herd, which live on a two acre paddock complete with sand pit and herb garden, is a way of maintaining breeding stock for zoos, and so helping to protect the animals against future extinction.

How and why zebras evolved to sport black and white stripes are questions that have tested scientists for over a century. Scientists have put forward at least 18 reasons why, from camouflage or warning colours, to more creative explanations like unique markers that help to identify individuals like a human fingerprint. But, for a long time new theories were introduced without rigorous tests.

Zebras, together with horses and asses, are members of the Equus genus. The three living species of zebras that roam eastern and southern Africa with their coat of dark hair broken by stripes of white, unpigmented hair, are the only striped equids. Striping patterns and intensity vary across species as well as location. These striping differences, coupled with the challenges that zebras face in their environment, have guided our understanding of how the stripes might work. While scientists still debate the exact origins and functions of zebra stripes, their recent efforts have focused more closely on three possibilities; protection from biting flies, thermoregulation and protection from predators. 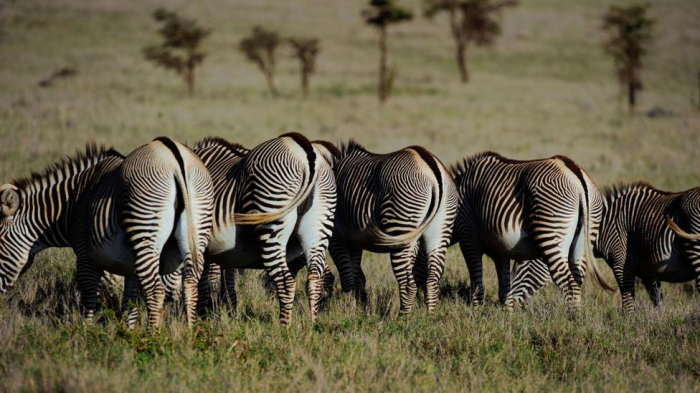 Flies are a common menace to animals in Africa, leading to theories that zebra's stripes might be a defence mechanism against the insects (Credit: Alamy)

Flies that bite and suck blood are a common menace to animals in Africa. Horseflies and tsetse flies also transmit diseases like sleeping sickness, African horse sickness, and the potentially fatal equine influenza. The thin hair of a zebra would pose little barrier to biting flies. But analyses of tsetse flies’ diets found no trace of zebra blood.

For almost a century now, anecdotal evidence and experiments with inanimate models have repeatedly shown that flies tend to not land on striped surfaces. Large-scale evidence came in a 2014 study by Caro and his colleagues. They collected weather, lion presence and zebra herd size data, and compared these factors to the stripes of zebras living in the area. Striping was more pronounced in environments that favour horseflies, according to Caro.

“[The 2014 study] really showed something really remarkable to us,” says Caro. “We also found absolutely no support for the other hypotheses.”

The flies would try to land on the stripes, but then fail to decelerate as they normally would approaching a non-striped surface, and bounce off. “It looks as if they cannot recognise that black and white surface as a good landing spot,” says Caro.

Caro says his team is working with “lots of unpublished data” from videos of flies approaching different patterns to learn how the stripes mess up a fly’s landing. And in Princeton University, evolutionary biologist Daniel Rubenstein and his collaborators are tackling the question using “fly vision in virtual reality”.

However, other zebra researchers, like retired animal lab technician Alison Cobb and zoologist Stephen Cobb of Oxford in the UK, aren’t convinced by the parasite-deterring explanation. They believe that zebra stripes aid primarily in thermoregulation. While Alison agrees with Caro’s findings, she thinks biting flies “seems too unimportant an effect” to have driven the evolution of zebra stripes. “Every zebra must avoid getting hot, and biting flies will come at certain places, and certain times of the year, but they are by no means as definite or frequent a threat as overheating,” says Cobb.

Thermoregulation has long been suggested by scientists as the function of zebra stripes. The basic idea is that black stripes would absorb heat in the morning and warm up zebras, whereas white stripes reflect light more and could thus help cool zebras as they graze for hours in the blazing sun. This seemingly straightforward logic has, however, received mixed support.

Caro and his team found only a weak spatial overlap between striping patterns and maximum temperatures. A year later, a spatial modelling study of plains zebras – the most numerous species that range from eastern to southern African – led by Brenda Larison of University of California, Los Angeles, found stronger striping patterns in areas that are warmer or receive more intense sunlight. 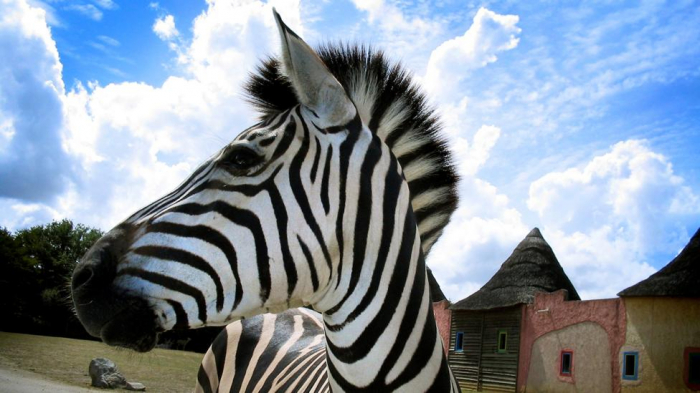 To our eyes the black and white stripes of a zebra is an unsusual pattern in the green brown environment of the African savannah (Credit: Getty Images)

Experiments so far haven’t brought further clarity, either. A 2018 study found water in barrels painted with stripes did not cool more than those in unstriped barrels. But Rubenstein isn’t convinced – he thinks this experiment had too few samples and too much variation in the data. Instead, Rubenstein says his team’s ongoing study with a larger number of water bottles shows that stripes help with cooling. Citing unpublished data, he says they have examined surface temperatures of animals in mixed herds, and found those of zebras to be a few degrees cooler than the unstriped animals.

But barrels and bottles can’t capture all parts of a zebra’s cooling mechanism – which perhaps makes these studies too simple to fully explain the purpose of zebra stripes. Like horses and humans, zebras cool by sweating. Evaporating sweat removes lots of heat, but evaporation must happen fast or else the sweat gets trapped and insulates the animal like a giant horse sauna. Equids have a protein called latherin that helps spread sweat to hair tips, increasing exposure to air and evaporation. 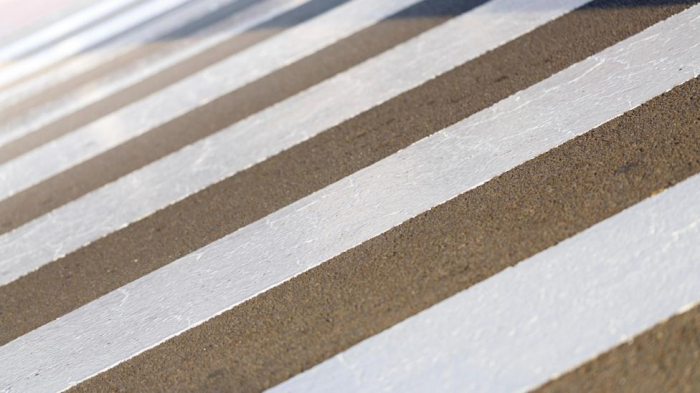 In June, the Cobbs reported in the Journal of Natural History that during the warmer hours of a day, black stripes on live zebras were consistently 12-15 Celsius higher than white stripes. They propose that the steady temperature difference between stripes would drive a “mildly turbulent air”. They further discovered that hairs on the black stripes erect during early morning and noon. These erect hairs could trap heat in the cool morning and facilitate sweat evaporation at noon.

As for the last zebra stripes hypothesis regarding protection from predators, Caro is sceptical. In his 2016 monograph, Zebra Stripes, Caro lists numerous evidence that contradicts zebras using stripes to hide from or confuse predators. Zebras spend most of their time in open grasslands where their stripes are conspicuous, and little time in the woods where stripes might camouflage them. They also tend to run from threat rather than hide. And lions appear to have no trouble eating lots of zebras.

Zebras tend to run from threats rather than try to hide (Credit: Alamy)

Rubenstein, however, is still working on the predation hypothesis, which he describes as “the hardest” hypothesis to test among all. He notes that previous studies have just tested if stripes confuse humans, but not lions. “When it comes to any given attack [on a zebra], we don't know how successful [lions] are or not.” His team is studying how lions attack striped and unstriped objects.

So, the question why zebras have stripes have proven very difficult and not without risks – Stephen Cobb has been bitten in the arm and admitted to hospital twice. Despite the extra vigour of recent work, the answer remains inconclusive. So maybe stripes evolved to solve multiple problems. They have been proven to protect zebras from biting flies, and might yet be shown to be an important tool in a zebra’s solution to overheating. The difficulty is that biting flies tend to be the most abundant where and when it’s warm and humid. “How do you tease those (two factors) apart? That's the hard part,” says Rubenstein. “I have no problem with both of them operating simultaneously.”