The unhealthy truth about non-dairy milk 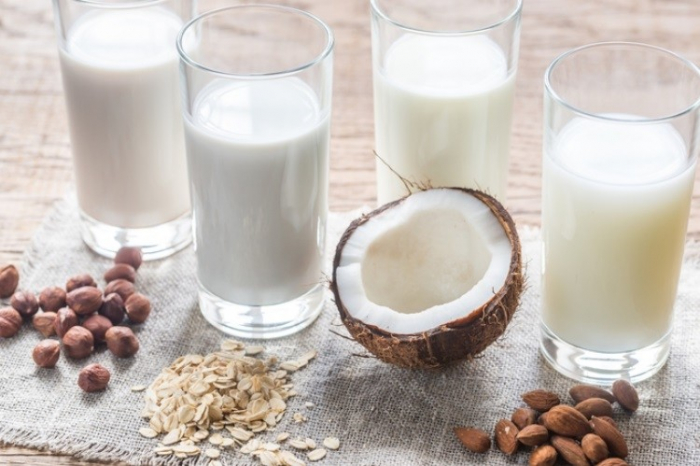 Will yours be an oat milk latte, or a flat white with soya? Your 'healthy' coffee order is a more loaded decision than it might seem.

This week, experts have warned that drinks containing alternative vegan milks may be less healthy than those made with cow’s milk. Shoppers are fooled by the ‘health halo’ of vegan options, reported Action on Sugar, when in fact they can contain far more sugar than the dairy option.

So, should high street coffee chains be more transparent about what their drinks contain? “Everyone has a right to awareness of what’s in their food and drink, so they can make their own personal choices,” says registered nutritionist Rhiannon Lambert, founder of Harley Street clinic Rhitrition. “If you aren’t aware of the amount of sugar in your milky drinks, you’re less able to adapt what you’re eating for the rest of the day. Your overall energy intake will be higher, it can affect your regulation of blood sugar levels, and it can be an issue for dental health. Sugar is not necessarily always bad, but it’s not something to be consumed in excess.”

Aside from checking out the added sugar content, what else do you need to be aware of when choosing vegan 'mylk' products?

“The first thing to remember when discussing which milk to opt for is that lifestyle and ethical choices play a huge role," says Lambert, pointing out that environmental factors drive peoples' decision making. Avoiding meat and dairy is understood to be the "single biggest way" to reduce your impact on Earth, according to research from the University of Oxford, published in the journal Science.

However, choosing a plant-based alternative isn't straightforward either. Many plant-based milk products have clocked up air miles having been imported from other countries.

But while there's no getting away from the fact that dairy milk produces the most greenhouse gas emissions, Lambert says it's unequivocally "superior" from a nutritional perspective.

"I wouldn’t recommend opting for an alternative milk frequently, unless you’re vegan, looking to reduce your dairy intake for environmental reasons, or if you’re lactose intolerant and there are no lactose free dairy options available," she says.

“As well as containing about half your daily recommended amount of calcium, a 250ml glass of dairy milk contains around 93pc of your daily intake of Vitamin B12 – one of the key nutrients which plant-based eaters tend to lack in their diet.

“Dairy also contains up to 52pc of your daily requirements for iodine, and in the UK, you can only get iodine from food sources in milk and fish. It’s a tricky micronutrient. Dairy milk is also a good source of protein, and contains phosphorus, potassium, and B2. If it’s fortified dairy milk, it might even also have added Vitamin D.

“The only alternative milk which has a nutritional profile with almost as much to offer is soya milk, which also contains a fair amount of protein. But in general, alternative milks don’t do much to bulk up your nutritional intake. Many of them consist of mostly water". She recommends you check the percentage of nuts or rice a product contains.

If you are opting for an alternative milk, Lambert recommends looking for ones which are fortified with added calcium, Vitamin D and/or Vitamin B12, and checking the label for the nutritional value. A lot of plant-based milks are not fortified with iodine, she notes, although she points consumers towards the likes of Oatly and M&S, which do have some iodine-fortified options.

Lambert adds that often mylks labelled as “organic” “pure” or “natural” aren’t fortified, but those additions are a good thing. Check the labels: red flags to look out for are added sugar for flavouring, rather than the naturally occurring sugar you find in dairy milk.

Aren’t the likes of coconut, rice and hemp milk lower in calories, and therefore conducive to weight loss? It’s a bit more complicated than that, says Lambert. “Weight loss is very different to looking at health status – we have to separate that. Yes, looking for a lower calorie drink may be beneficial for you if you’re looking at your daily energy requirements in and out, but if you’re substituting dairy frequently every day, you could easily become deficient if your overall diet isn’t providing you with those essential nutrients.

“There’s a huge misconception led by celebrity trends that anything labelled vegan is “healthy”. Of course, you can be a healthy vegan with a balanced diet – but your nutritional intake needs to be very well planned and carried out, and you do still need to be careful of things which are added to products, and of deficiencies. Vegan cereal bars and chocolate, for example, still contain a lot of sugar.”