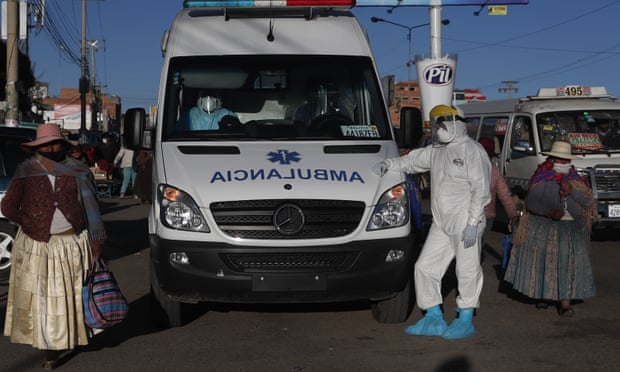 Researchers with the US Centers for Disease Control and Prevention have discovered human-to-human transmission of a rare virus in Boliviabelonging to a family of viruses that can cause haemorrhagic fevers, such as Ebola, the Guardian reports.

The news is a reminder that scientists are working to identify new viral threats to humankind, even as countries around the world battle a new wave of Covid-19 outbreaks.

Scientists said that in 2019, two patients transmitted the virus to three healthcare workers in Bolivia’s de facto capital, La Paz. One of the patients and two medical workers later died. Only one small outbreak of the virus has been previously documented, in the Chapare region 370 miles east of La Paz in 2004.

“Our work confirmed that a young medical resident, an ambulance medic and a gastroenterologist all contracted the virus after encounters with infected patients,” said Caitlin Cossaboom, an epidemiologist with the CDC’s division of high-consequence pathogens and pathology. Two of the healthcare workers later died. “We now believe many bodily fluids can potentially carry the virus.”

The virus is believed to be carried by rats, which in turn may have passed it to humans. In general, viruses spread through bodily fluids are easier to contain than respiratory viruses such as Covid-19.

Cossaboom said patients suffered fever, abdominal pain, vomiting, bleeding gums, skin rash and pain behind the eyes. Because there are no specific drugs for the disease, patients receive only supportive care such as intravenous fluids.

“We isolated the virus, and we were expecting to find a more common disease, but the sequence data pointed to Chapare virus,” said Maria Morales-Betoulle, a pathologist at the CDC. “We were really surprised.”

The findings were presented on Monday at the annual meeting of the American Society of Tropical Medicine and Hygiene (ASTMH). They are viewed as important because human-to-human transmission could point to the potential for future outbreaks.

Researchers also said it was possible the virus had circulated for some years undetected, because it could easily be misdiagnosed as dengue, a virus with similar symptoms. Scientists said they needed to continue to study the virus to understand its capacity to cause outbreaks.

“While there is still much that remains unknown about Chapare virus, it’s commendable how quickly this team was able to develop a diagnostic test, confirm human-to-human transmission and uncover preliminary evidence of the virus in rodents,” said the ASTMH president, Dr Joel Breman.

“It’s a valuable lesson that international scientific teams, equipped with the latest tools and freely sharing their insights, are our best frontline defense against the disruptive threats of deadly infectious diseases.”