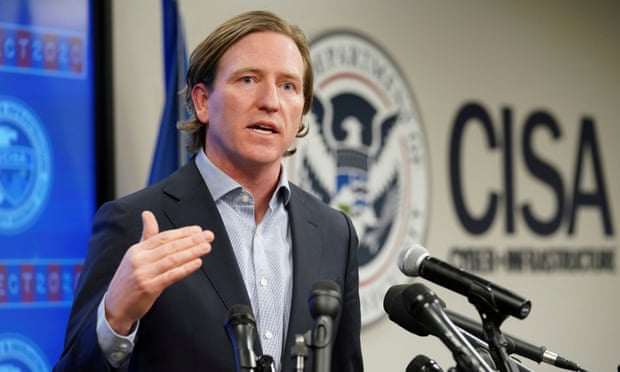 Donald Trump has fired the director of the federal agency that vouched for the reliability of the 2020 election and pushed back on the president’s baseless claims of voter fraud.

Trump fired Christopher Krebs, who served as the director of the Department of Homeland Security’s Cybersecurity and Infrastructure Security Agency (Cisa), in a tweet on Tuesday, saying Krebs “has been terminated” and that his recent statement defending the security of the election was “highly inaccurate”.

The firing of Krebs, a Trump appointee, comes as Trump is refusing to recognize the victory of the president-elect, Joe Biden, and removing high-level officials seen as insufficiently loyal. He fired Mark Esper, the defense secretary, on 9 November part of a broader shake-up that put Trump loyalists in senior Pentagon positions.

Krebs had indicated he expected to be fired. Last week, his agency released a statement refuting claims of widespread voter fraud. “The November 3rd election was the most secure in American history,” the statement read. “There is no evidence that any voting system deleted or lost votes, changed votes, or was in any way compromised.”

Krebs, a former Microsoft executive, ran the agency, known as Cisa, from its creation in the wake of Russian interference with the 2016 election through the November election. He won bipartisan praise as Cisa coordinated federal state and local efforts to defend electoral systems from foreign or domestic interference.

Trump mentioned the Cisa statement in his tweet firing Krebs. The president’s tweets also repeated many of the baseless election fraud claims he has made in recent weeks.

Several top Democrats were swift to condemn the president’s decision to fire Krebs.

Angus King, the Maine senator who is among the candidates who may be appointed Director of National Intelligence in the upcoming Biden administration, called Krebs “a dedicated public servant who has helped build up new cyber capabilities in the face of swiftly-evolving dangers.

“By firing him for doing his job, President Trump is harming all Americans.”

Adam Schiff, the Democratic California congressman who chairs the House intelligence committee, said that Trump’s move is “ pathetic and predictable from a president who views truth as his enemy”.

And Mark Warner, a Democratic senator of Virginia and co-chair of the Senate cybersecurity caucus, said Krebs “is an extraordinary public servant and exactly the person Americans want protecting the security of our elections”.

“It speaks volumes that the president chose to fire him simply for telling the truth,” he said, echoing many of his Democratic colleagues.

Ben Sasse, a Republican senator of Nebraska also chimed in. “Chris Krebs did a really good job,” he said. “He obviously should not be fired.”

Krebs tweeted from his personal account that he was “honored to serve”.

Twitter quickly flagged the tweets in which the president announced Krebs’ firing for containing “disputed” claims about the election.

Unwilling to accept reality and concede the election, Trump has doubled down on conspiracy theories about election fraud. His administration has blocked the Biden transition team from receiving briefings, but now that Krebs is no longer working in an official capacity, the incoming administration may be able to glean non-classified briefings from the former cybersecurity official.