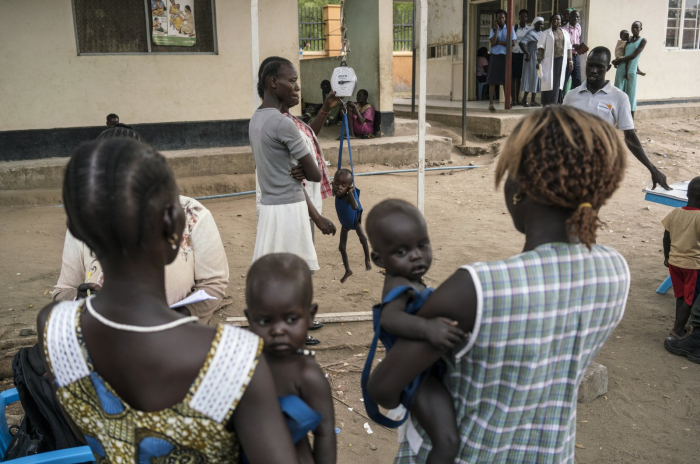 Twin baby boys lay on a bed of woven palm leaves in a remote camp for displaced people in Yemen’s north, their collar bones and ribs visible. They cried loudly, twisting as if in pain, not from disease but from the hunger gnawing away at them, AzVision.az reports citing AP.

Here, U.N. officials’ increasingly dire warnings that a hunger crisis is growing around the world are becoming a reality.

U.N. agencies have warned that some 250 million people in 20 countries are threatened with sharply spiking malnutrition or even famine in the coming months.

But David Beasley, head of the World Food Program (WFP), says billions in new aid are needed. Without it, “we are going to have famines of biblical proportions in 2021,” he said in an Associated Press (AP) interview last week.

In multiple countries, the coronavirus pandemic has added a new burden on top of the impact of ongoing wars, pushing more people into poverty, unable to afford food. At the same time, international aid funding has fallen short, weakening a safety net that keeps people alive.

In Afghanistan’s capital Kabul, Zemaray Hakimi said he can only give his children one meal a day, usually hard, black bread dunked in tea. He lost his work as a taxi driver after contracting COVID-19 and now waits daily on the street for day laborer work that rarely comes.

When his children complain of hunger, he said, “I tell them to bear it. One day maybe we can get something better.”

South Sudan may be closer than any other country to famine, as crisis after crisis wears on a population depleted by five years of civil war. The U.N. projected earlier this year that a quarter of the population of Jonglei State, home to more than 1.2 million, would reach the brink of famine.

Now cut off from much of the world by flooding that has affected some 1 million people, many South Sudanese have seen farming and other food routines ripped apart. The challenges are so numerous that “plastic sheets are not available, as they had largely been used for the previous flood response,” the U.N. humanitarian agency said this week.