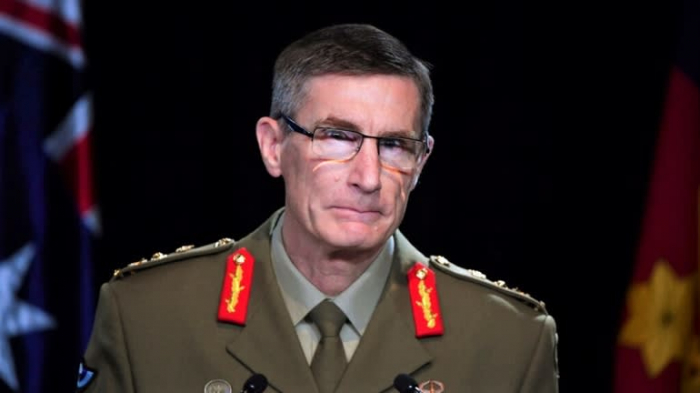 Gen. Angus Campbell, chief of the Australian Defence Force, delivers the findings of the inquiry into special forces' actions in Afghanistan on Nov. 19 in Canberra. © AP

Shocking allegations of war crimes by Australian soldiers serving in Afghanistan between 2006 and 2013 have left an indelible stain on Australia's armed forces and the country's international reputation.

A report released by the Chief of the Australian Defence Force, Gen. Angus Campbell, last Thursday found "credible information" on the unlawful killing of 39 Afghans, and cruel treatment of two more. The incidents involved 25 current or former soldiers from Australia's elite special forces, 19 of whom were recommended for referral to the Australian Federal Police for criminal investigation.

The author of the report, Maj. Gen Justice Paul Brereton, described the special forces' actions as "disgraceful and a profound betrayal" of the ADF.

Prime Minister Scott Morrison on Saturday called it a "terribly disturbing and distressing report" in his first public remarks on the matter. But he said "the thing about Australia" is that "we will deal with it. And we will deal with it under our law, under our systems, and our justice system."

What makes the scandal even worse is that the ADF did not act much earlier, and people who should have known ducked their responsibilities. There have been rumors for years that some of Australia's special forces in Afghanistan were violating command lines and committing abuses, dating back to 2006.

In 2017, former Army Maj. David McBride, a frustrated whistle blower who had served in Afghanistan, leaked material about bad battlefield behavior to the national broadcaster, the Australian Broadcasting Corporation. The ABC produced an explosive "Afghan Files" report in July 2017, while McBride -- who had tried unsuccessfully to raise his complaints via the military system -- has been charged with document theft and illegal release of material.

Also in 2017, veteran journalist Chris Masters published "No Front Line. Australian special forces at war in Afghanistan" -- a book that raised questions about some of their actions.

Campbell has apologized to the people of Afghanistan, compensation is likely to follow, and prosecutions are expected. Some soldiers may go to jail eventually, but legal censure is unlikely to reach those high in the command chain. Certainly, the political leaders who sent Australian soldiers into harm's way far from home will not be held accountable.

On a broader level, Australia has now lost any claim to the high moral ground when it comes to human rights violations. The allegations of summary executions of prisoners and noncombatants write a terrible postscript to Australia's long military involvement in Afghanistan, which began soon after the September 2001 al-Qaida terrorist attacks in the U.S.

One underlying problem in the Afghan mission was that while Australia was willing to go to war to support its main military ally, the U.S., its political leaders did not want too many casualties. To minimize battlefield losses, Australia used its most prestigious units, the Special Air Service regiment and the 2nd Commando Regiment, to do the dirty work of going after the enemy. Australia's first combat death in Afghanistan was an SAS sergeant, killed when his long-range patrol vehicle hit a mine in February 2002.

While more than 26,000 Australian soldiers served in Afghanistan between 2005 and 2016, only 3,000 of them were in the Special Operations Task Group. They are the ones whose warrior culture apparently turned toxic under the stress of sustained fighting and multiple deployments. They suffered disproportionate casualties -- almost half the 41 Australian soldiers who died in Afghanistan were from the Special Operations Task Group, and many veterans are suffering post-traumatic stress disorder since serving there.

Gen. Campbell said the "shameful" report compiled by Brereton, a New South Wales Supreme Court judge, after a four-year investigation includes alleged instances of "blooding," where new patrol members were coerced to shoot a prisoner to achieve the soldier's first kill. The public version of the report is heavily redacted, with the names of witnesses and alleged perpetrators removed for now, pending possible prosecutions.

Clearly, there were command failures. Campbell referred to what he called a "toxic competitiveness" between the SAS regiment and the 2nd Commando regiment that was a "disgrace" to both. "Not correcting this culture, as it developed, was a failure of both unit and higher command."

The Brereton report says it found no evidence that troop, squadron or Special Operations Task Group commanders, or higher commanders, knew war crimes may have been committed. But Campbell said being unaware did not relieve commanders of moral responsibility. He said higher command arrangements were "too dispersed and too distant" to effectively direct and control the Task Group.

Afghan boys who sell boiled eggs climb to a hilltop overlooking Kabul in February 2020.   © Reuters
By 2015, reports and speculation about abuses were so pervasive that Campbell, then chief of the Army, brought in a military sociologist, Dr. Samantha Crompvoets, to investigate. Her findings led to the launch of the Brereton inquiry in 2016.

While the ADF now appears ready to clean up its culture, it is too late for McBride, a lawyer who served twice with the ADF in Afghanistan. McBride was so concerned at what he saw, he lodged complaints up the chain of command from 2014 onward. He also reported it to the Australian Federal Police. He was ignored by senior officers, and ultimately gave material to the ABC. McBride was arrested in 2017 and faces a possible life sentence at his trial next year.

Former independent Senator Nick Xenophon, whose law firm Xenophon Davis is representing McBride, penned an open letter to Campbell just before the Brereton report was released. In it, Xenophon wrote that whistle blowers like McBride and a handful of others made the report possible by refusing to be intimidated into silence. "In my view, they have redeemed the reputation of our nation," he wrote. "They do not deserve jail cells."

The same cannot be said for those identified as alleged war criminals. But prosecutions will take years to play out, and some of the most junior alleged perpetrators may get immunity for testifying against their superiors.

In the meantime, the Brereton report has laid bare the ADF's tainted approach to anti-insurgent warfare in Afghanistan, where a relatively small number of young soldiers fought a war without end, placed under intense pressure every day, serving in an unfamiliar environment against an enemy hard to distinguish from the surrounding civilian population.

Their alleged acts have brought shame upon them, but perhaps the greatest failing is the blindness of the ADF chain of command. The war crimes allegations have dealt a grievous blow to Australia's pride in its military, but as human rights observers have noted, will other countries now have the courage to shine a light on their own forces' conduct in war?