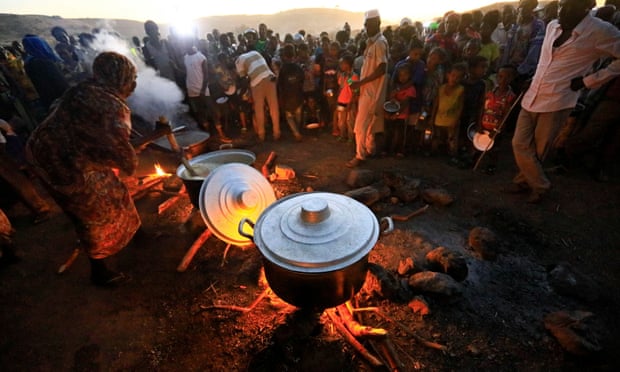 The leader of Ethiopia’s dissident Tigray region has said his people are “ready to die” defending their homeland, rejecting the prime minister’s Sunday night ultimatum that they surrender within 72 hours.

Abiy Ahmed launched a military campaign against the Tigray People’s Liberation Front (TPLF) on 4 November, accusing it of attacking two federal military camps in the northern region, and of defying and seeking to destabilise his government.

The federal army says its forces are within 37 miles (60km) of Mekelle, the Tigray capital and the seat of the TPLF, ahead of a threatened bombardment of the city of half a million people.

Abiy – last year’s Nobel peace prize winner – on Sunday called on the TPLF to surrender peacefully within three days, saying they were “at a point of no return”.

The TPLF’s leader, Debretsion Gebremichael, claimed Abiy was trying to cover for setbacks his army had suffered against Tigrayan forces and was issuing threats to buy time. “He doesn’t understand who we are. We are people of principle and ready to die in defence of our right to administer our region,” Debretsion told Agence France-Presse via WhatsApp on Monday.

On Tuesday, a spokesman for the Tigray forces said they had “completely destroyed” the army’s 21st mechanised division. There is no confirmation of the claim and government officials did not return calls seeking comment.

A communications blackout in the region has made claims from both sides difficult to verify.

The conflict has killed hundreds so far and displaced many more. More than 40,000 refugees have crossed into neighbouring Sudan and roads in Tigray are crowded with people escaping from the fighting.

Brig Gen Tesfaye Ayalew was quoted by the state-affiliated Fana Broadcasting Corporate as saying federal troops were “marching into Mekelle”, having captured key towns to the north and south.

The army has threatened a “no mercy” tank assault on the TPLF leadership in Mekelle, warning civilians to leave while they can.

“Treating a whole city as a military target would not only [be] unlawful, it could also be considered a form of collective punishment,” the Human Rights Watch researcher Laetitia Bader said.

The US called for immediate mediation between the Ethiopian federal government and the TPLF to end “this tragic conflict now”.

Abiy has so far rejected efforts by the African Union and others to bring both sides to the negotiating table.

The US senator Chris Coons, a member of the Senate foreign relations and appropriations committees, spoke to Abiy on Monday, urging talks and reconciliation.

Over the weekend, the Ethiopian army broke through TPLF defensive positions on to the high plateau around Mekelle. Within days federal forces are expected to be within artillery range of the city.

Abiy has urged the people of Mekelle to side with the national army against the TPLF “in bringing this treasonous group to justice”.

Ethiopian officials describe the offensive in Tigray as a “law enforcement operation” aiming to remove rebel leaders and restore central authority in the region.

The TPLF says it is defending its legitimate rights under Ethiopia’s devolved constitutional system.

Observers point to growing evidence of an ethnic dimension to the conflict, pitting the Amhara people from the neighbouring province against long-time rivals, the Tigrayans.

With fighting having subsided in the west of Tigray, government officials are seeking to reimpose order in the strategically important town of Humera after ousting TPLF forces early in the war. The strategy appears to be to erase TPLF control partly by bringing administrators in from the neighbouring Amhara region, a move that risks inflaming ethnic tensions.

Throughout much of the west, federal soldiers are scarcely seen, with security being maintained by Amhara’s uniformed “special forces”. Civil servants have also arrived from Amhara to take over the administration of some Tigrayan towns and cities.

TPLF banners at checkpoints and in town squares in Humera have been replaced by the green, yellow and red imperial-era flag of Amhara nationalism.

The presence of Amhara flags, officials and soldiers will fuel fears of occupation among Tigrayans, who are mired in a decades-old dispute over land that has, in the past, sparked violent clashes and continues to be a dangerous flashpoint.

Amnesty International documented a gruesome massacre in which “scores and likely hundreds” of people were stabbed and hacked to death in the south-western town of Mai-Kadra. Some reports suggest the victims were Amharans living in Tigray.

The UN security council will hold its first meeting on the conflict in Tigray on Tuesday, diplomatic sources said late on Monday. The virtual meeting would not be open to the public, they said, and it was not yet clear if a statement would be issued afterwards.