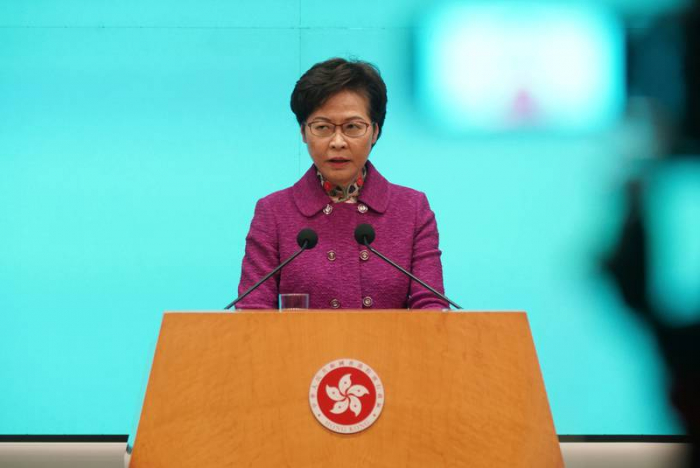 Hong Kong leader Carrie Lam says she has to pile up cash at home as she has been unable to open a bank account in the global financial centre since Washington sanctioned her shortly after Beijing imposed a national security law on the city, Reuters reported.

Beijing circumvented Hong Kong’s legislature and imposed a national security law on the former British colony on June 30, a move condemned by some foreign governments, business groups and rights groups.

Hong Kong and authorities in Beijing said the law was necessary to restore stability after more than a year of anti-government protests.

“Sitting in front of you is a chief executive of the Hong Kong SAR (Special Administrative Region) who has no banking services made available to her,” Lam told HKIBC, an English-language news channel in the city, on a preview clip shown late on Friday.

“I’m using cash for all the things,” she said. “I have piles of cash at home, the government is paying me cash for my salary because I don’t have a bank account.”

In August, the United States imposed sanctions on Lam and other top officials for what Washington says is their role in curtailing political freedoms in the territory.

“I don’t want to... deter people from serving in a public position because it is very honourable in this set of circumstances to be so unjustifiably sanctioned by the U.S. government,” Lam said.

Lam is paid about HK$5.21 million ($672,232) a year, according to local media reports, making her among the highest paid public officials in the world.