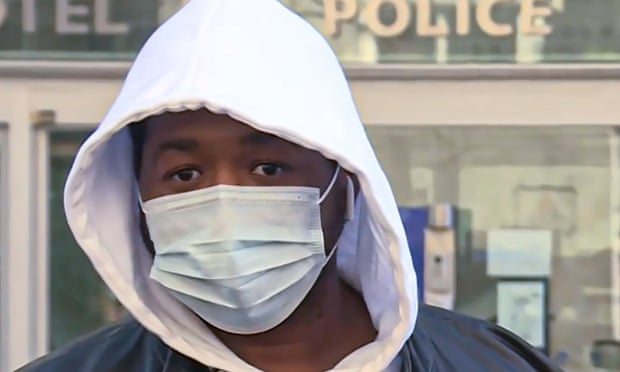 Four French police officers have been charged in connection with the beating of a black music producer a week after their allegedly unprovoked attack was exposed in a video that scandalised the country.

The footage showed police punching, kicking and using a truncheon on Michel Zecler, who alleged that they also racially abused him several times. Before the video came to light, the officers had accused Zecler, 41, of resisting arrest and attacking them.

Three of the officers have been mis en examen – the nearest thing to being formally charged in France – with “deliberate violence by a person in public authority, in a group and with an arm”, and with “falsifying statements”. The fourth officer, who fired a teargas canister, has been accused of “deliberate violence”.

Two of the officers – a 44-year-old brigadier with 19 years of reportedly exemplary service and a 23-year-old – are being held in custody, while two have been given conditional release.

At a press conference on Sunday, the Paris public prosecutor, Rémy Heitz, said the three officers seen in the video said they had “panicked” but admitted “their blows were not justified and they had mainly acted out of fear”.

“They have denied any racist insults,” Heitz added. He suggested three of the officers should remain in custody “to avoid the perpetrators communicating or pressure on witnesses”.

The officers said they had approached Zecler because he was not wearing a mask and because there was a strong smell of cannabis coming from his bag. After searching the bag, police found only 0.5g of cannabis, Heitz said.

The case has again raised fears that a new law that French MPs approved last week restricting the right to publish or broadcast images of police and gendarmes on duty in certain circumstances will be used to cover up alleged wrongdoing.

Critics of article 24 of the global security law, which is awaiting approval from the senate, say the video of the Zecler attack could not have been made public under the legislation. The government says it would criminalise the publication of such images only with “intent to harm the physical or psychological wellbeing” of the officers.

The prime minister, Jean Castex, has promised an independent commission will look at article 24 with a view to rewriting it. Zecler, who was held in custody for 48 hours, said without the film “I would be in prison now”.

On Saturday, a protest against the law in central Paris degenerated into violence with vehicles and a brasserie torched, banks, shop and offices vandalised and paving stones and fireworks aimed at security forces who responded with teargas and anti-riot tactics.

Among those hurt was the Syrian photojournalist Ameer Alhalbi, 24, who has worked for Agence France-Press (AFP) and who was unable to get to hospital for several hours. Alhalbi said he was reminded of being in the Syrian civil war. “It was Aleppo that came back to me,” he said.

Phil Chetwynd, AFP’s global news director, demanded that police investigate the incident. “We are shocked by the injuries suffered by our colleague Ameer Alhalbi and condemn the unprovoked violence,” Chetwynd said.

Police reported that 81 people were arrested, The interior minister, Gérald Darmanin, said 98 police officers were hurt. “Those behind the violence will be pursued,” Darmanin said.