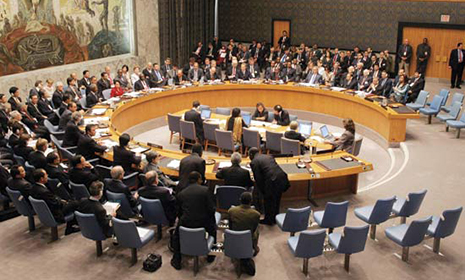 Azerbaijan vacated its seat on the UN Security Council, the world body`s power centre, as its two-year term expired on December 31, 2013.

For the first time in its history since regaining independence, the Republic of Azerbaijan was directly involved in discussions and decision-making process at various levels on the international agenda. Azerbaijan revealed its principled position on a number of topics, thus, taking advantage of the opportunities provided by the Security Council membership.

The issues Azerbaijan paid more attention were rule of law, prevention and resolution of conflicts, protection of civilians in an armed conflict, fight against terrorism, cooperation between the UN and regional organizations as well as Middle East peace process, situation in Syria, Afghanistan and some states in Africa.

Azerbaijan assumed UN Security Council rotating presidency two times in May 2012 and October 2013. The country organized a number of discussions and events on the important issues. The central theme of Azerbaijan`s first presidency in May 2012 was “Threats to international peace and security caused by terrorist acts: strengthening international cooperation in the implementation of counterterrorism obligations”. This topic was discussed at the high-level thematic meeting of the Security Council, held on 4 May 2012 under the chairmanship of President Ilham Aliyev and with attendance of UN Secretary General Ban Ki-moon. The statement of the President of the Security Council was adopted as the final document. The statement underlines the importance of fight against all forms and manifestations of terrorism. In addition, it highlighted the importance of the principle of territorial integrity of states, prevention of terrorism, promotion of respect and dialogue among religions and cultures as a means to fight it.

During its second presidency in the Security Council, Azerbaijan convened on 28 October a high-level meeting of the Security Council on the theme of “Strengthening partnership synergy between the United Nations and the Organization of Islamic Cooperation (OIC)” - the first ever meeting of the Council on this subject. The purpose of the meeting was to review the current state of cooperation between the United Nations and the OIC, as the second largest intergovernmental organization, in the maintenance of international peace and security, and to explore ideas, measures and joint actions for strengthening the partnership synergy between the two organizations.

Chaired by Mr. Elmar Mammadyarov, Minister of Foreign Affairs of the Republic of Azerbaijan, the meeting was attended by Secretaries-General of the two organizations, Mr. Ban Ki-Moon and Dr. Ekmelleddin Ihsanoglu, as well as by the high-level representatives of States members of the Security Council. The discussions focused on the critical issues in the agenda of the Security Council and on the ways of strengthening close cooperation and partnership between the United Nations and other international organizations, including in particular the OIC, in addressing those issues more effectively.

During its presidency, Azerbaijan made every effort to press ahead with national interests at a global level. In regard to the ongoing conflict between Armenia and Azerbaijan, concerns were voiced over the continued occupation of the Azerbaijani territories by Armenia and calls were made for the resolution of the conflict on the basis of the principles of sovereignty, territorial integrity and the inviolability of internationally recognized borders of Azerbaijan and in line with Security Council resolutions 822, 853, 874 and 884 adopted in 1993. In addition, the country raised the issue of bringing perpetrators of outrages on humanity to trial.

During the Azerbaijani Presidency of the Security Council in May 2012, it had organized an Arria Formula meeting to encourage a frank exchange of views, within a flexible procedural framework, on the role of mediation, judicial settlement and justice in promoting durable and international law-based peace and reconciliation. It was attended by 120 representatives of UN member states, UN Secretariat, international intergovernmental organizations, civil society and scientific community. The event was addressed by Deputy Foreign Minister of Azerbaijan Araz Azimov and Professor Malcolm N. Shaw QC, Senior Fellow at the Lauterpacht Centre for International Law at the University of Cambridge.

Azerbaijan, which pays attention to the development of bilateral relations with the African nations, tried to contribute to resolution of problems the African continent faced. The important undertaking during Azerbaijan presidency was the official mission of the Security Council to Africa from 3 to 9 October. During this four-leg mission, the members of the Council visited the Democratic Republic of the Congo, Rwanda, Uganda and Ethiopia with the aim of taking stock of and discussing the current political, security and humanitarian situation in Africa`s Great Lakes region, as well as showcasing their support to the UN-led and regional peace efforts.

The 7th annual joint consultative meeting between the African Union Peace and Security Council and the United Nations Security Council presided over by permanent representative of Azerbaijan to the UN Agshin Mehdiyev was held in Addis-Ababa, the capital city of Ethiopia. The meeting, co-chaired by Equatorial Guinea and Azerbaijan in their respective capacities as presidents of both bodies, had discussions and exchange of views on the situation in the Great Lakes region, Somalia, the Central African Republic and the Sahel region, the relations between the Sudan and South Sudan, and on the enhancement of partnership between the African Union and the United Nations. The meeting was concluded with the adoption of a Joint Communiqué, which was issued as a document of the Security Council.

During the past two years, the cooperation between the UN member countries, UN Secretariat, non-governmental organizations, think tanks has been strengthened, AzerTAc reports.