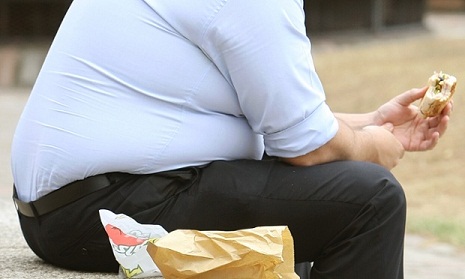 Health researchers have identified six different types of obese people and suggested that targeting by type may be more effective in dealing with obesity.
In a study, the researchers break down those with a body mass index (BMI) of 30 or more into distinct groups – heavy drinking men, young healthy women, unhappy and anxious middle-aged, affluent and healthy older people, physically sick but happy older people, and those with the poorest health.

Using different approaches for each group could be a better application of scarce funds for treating obesity, the Sheffield University-led team suggests in the Journal of Public Health.

BMI is based on individuals’ height and weight, and anyone with a rating above 30 is classed as obese. However, as a system of measurement it does not take into account demography, health or behaviour.

The researchers used self-reported data from more than 4,000 people between the ages of 16 and 85, collected in the 2010-12 wave of the continuing Yorkshire Health Study.

Health variables included chronic conditions such as fatigue, pain, insomnia, depression, heart disease, arthritis, stroke or cancer. Wellbeing was measured, as were behaviours such as whether the person smoked, the amount of alcohol people consumed in a week and whether they walked for more than an hour a week.

Their use of slimming clubs, portion control and over-the-counter weight control medication were among other factors considered.

Younger healthier women had the most positive health characteristics, while heavy drinking men were less likely to be managing their weight, although they did report above average levels of physical exercise, including walking.

The unhappy, anxious middle-aged were predominantly women, reporting poor mental health, anxiety, depression and fatigue. They had a low sense of wellbeing but engaged in healthy physical activity and consumed the least alcohol.

Among older people, the affluent healthy group included a large proportion with high blood pressure and above average alcohol consumption, while the physically sick but happy group had more people with chronic health conditions but also relatively low levels of anxiety and depression.

People in the poorest health were the most deprived and reported high levels of pain and fatigue. The group also had the highest mean BMI.

For the unhappy and anxious middle-aged, it may be better for health interventions to involve increasing exercise and counselling, whereas advising exercise for those in poorest health may not be reasonable and more modest goals should be set, the researchers said.

Mark Green, from Sheffield University’s school of health and social research, said: “Policies designed to tackle obesity and encourage healthier lifestyles often target individuals just because they are obese. We are all different and different health approaches work for different people.

“In the future, we hope that GPs will keep in mind these six groups when offering advice to their patients.”

"We observe positive dynamic in fight against coronavirus" - Hikmet Hajiyev

Openings may lead to increase in numbers - TABIB