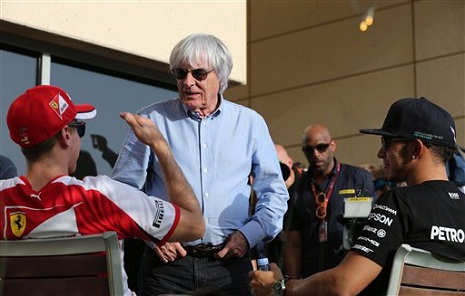 Formula One commercial chief Bernie Ecclestone says the Azerbaijan Grand Prix will make its debut next season, despite concerns over the country
Known as the Baku European Grand Prix, it is to be held as a street race in the country’s capital, Baku.

A report this year by Human Rights Watch said that there had been a deterioration in the former Soviet Republic state’s record, with more than 30 human rights defenders — including political activists and journalists — convicted or imprisoned.

Speaking ahead of the Bahrain GP, which was canceled in 2011 amid violent clashes after an uprising demanding political reforms, Ecclestone said he did not think there would be any problems.

“It’s going to be another good race,” he said.

Earlier this week, the sport’s official website carried a legal notice stating that “The Formula One Group is committed to respecting internationally recognized human rights in its operations globally.”

The Human Rights Watch report on Azerbaijan said “the Azerbaijani government escalated repression against its critics, marking a dramatic deterioration in its already poor rights record.”

Asked if the human rights situation in Azerbaijan had been checked out with a view to hosting next year’s race, Ecclestone said “We have” before adding “I think everybody seems to be happy. There doesn’t seem to be any big problem there.”

Ecclestone also addressed questions about the worrying decline in the status of iconic European races.

More races are heading to countries in Asia and the Middle East, where government funding can better cover the high hosting fees. Qatar is reportedly very keen on hosting a race, although Ecclestone did not say Sunday whether that is a possibility.

The German GP was erased from the 2015 schedule because of financial problems — and it is uncertain to be held next year — and Ecclestone has not guaranteed the future of Italy’s famed Monza race, which is held outside of Milan in September and is particularly popular with Ferrari fans.

Ecclestone is in ongoing talks with Monza promoters over a new deal, with the current deal set to expire after next year’s race. There is an impasse with promoters urging Ecclestone to lower his prices, but with Ecclestone also in the position of receiving potential offers from other countries keen to host the race and able to afford it.

“We have to wait and see. They don’t have an agreement. Bit like Germany really,” said Ecclestone, who somewhat dismissed the idea that historic races like Monza, Hockenheim and Nuerburgring are too important to be replaced.

“I tell you something, I was told that when we didn’t have a race in France (Magny-Cours). And Germany now,” he said. “We’ve got some good replacements, haven’t we?”

Ecclestone was also asked whether he agreed with prospective plans to introduce 1,000 horsepower V6 engine units from 2017 — a switch to a louder engine more akin to the type of roaring engines that were a hallmark of the sport before the switch to the quieter V6 turbo hybrid power units last year.

There are four engine manufacturers in F1 — Mercedes, Renault, Ferrari and Honda — and they held talks during the Bahrain GP about the 1,000 horsepower engines.

“If that’s the way forward then we should continue to work on it,” Mercedes team principal Toto Wolff said. “Concepts are being put into place to make it a spectacular new formula in 2017.”

Ecclestone, who is not a fan of the V6 hybrid units, said the move could work so long as the transition is smooth and the price not too high. Increasing fuel flow would increase the noise, but also costs.

“If it’s going to be the current engine, upgraded to 1,000, good,” he said. “They need to supply them at a price that teams can afford.”