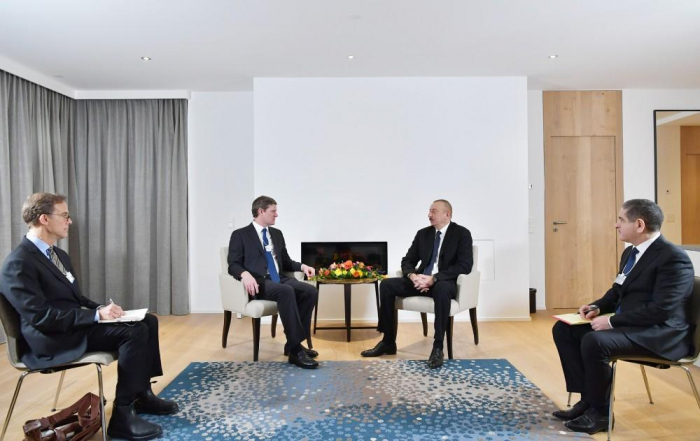 President of the Republic of Azerbaijan Ilham Aliyev has met with President of Visa Ryan McInerney in Davos.

McInerney emphasized that his this year’s visit to Davos mainly aimed to meet with President Aliyev. He noted that Azerbaijan has made significant strides in terms of the development of digital payments under the leadership of President Aliyev in recent years, pointing out Visa’s close cooperation with the country's relevant bodies in the implementation of various projects in this area.

McInerney said that tax incentives and other initiatives applied in Azerbaijan for the development of cashless payments will be very useful, adding that this is an example for other countries too.

Saying that Visa branded cards are widely used in electronic payments in Azerbaijan, McInerney expressed the company’s keenness to expand its activity in the country and its readiness to support the widespread use of non-cash payments in many areas, including in public transport.

President Aliyev described the development of e-payments as one of the crucial issues for Azerbaijan. He pointed to the large-scale reforms carried out in this regard, saying these reforms have already yielded results, that it has been reflected in international ratings, for example, in the World Bank’s Doing Business 2019 report, in which Azerbaijan climbed 32 spots to rank 25th.

The president hailed the importance of efforts for further strengthening of bilateral cooperation.