How to take the ultimate trip to Baku 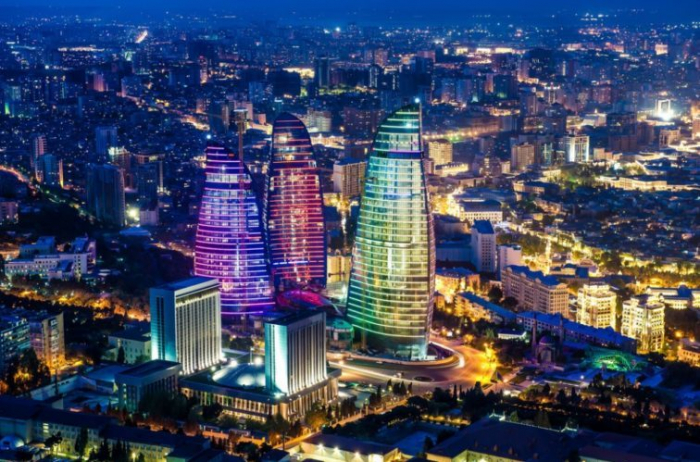 On the shores of the Caspian Sea, the old Soviet Union meets Dubai. Right now Arsenal and Chelsea fans are racing to find flights to the Bolshevik-to-bling capital of Azerbaijan. The London football teams will meet in the Europa League final in the city’s Olympic Stadium on Wednesday 29 May.

Its location is extreme: Baku is the easternmost city in the Caucasus, and the lowest-lying capital in the world – nearly 100 feet below ocean level (the Caspian Sea, like the Dead Sea, is below sea level as measured in the rest of the world). And it is a deeply intriguing location, with a fascinating Old City and dramatic new architecture.

Baku also has a range of unusual natural and man-made attractions on the outskirts. 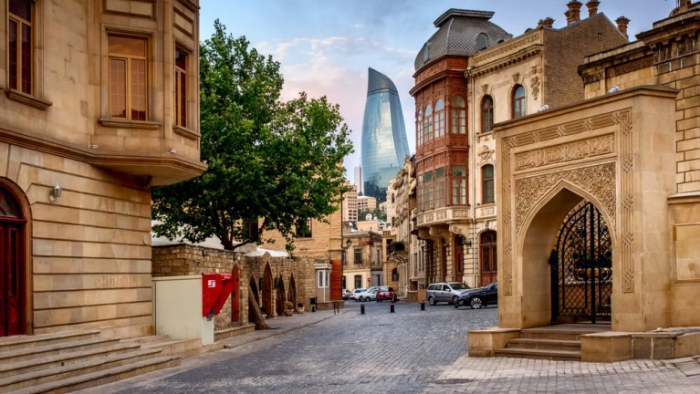 At the heart of Baku, stout walls rise to protect the Old City. As you walk through the Double Gate from the more modern city centre, you immediately sense that this is way beyond Europe – indeed, Baku is further east than Baghdad. The caravanserais and merchants’ mansions have been repurposed as restaurants, hotels and galleries.

But the sense of medieval might is preserved in the shape of the Maiden Tower, a 12th-century 100-foot stone guardian for the city. The outstanding cultural treasure is the Palace of the Shirvanshahs – a sandstone complex of prayer and indulgence. 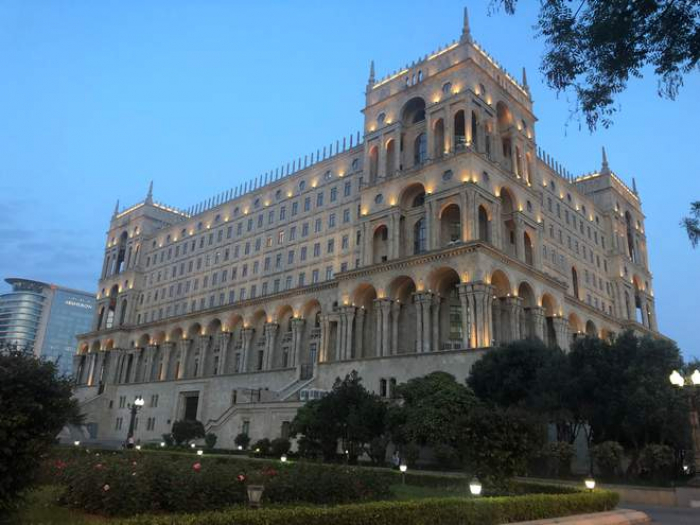 Leaving the Old City from the Double Gate, head downhill to Fountains Square – actually an extended polygon that serves as Baku’s busy commercial and social hub. A series of fountains is augmented by public sculpture, in particular, the life-size bronze of a young woman chatting on a mobile phone – one small indication of how liberal this nominally Islamic nation is. (Another is the open-air consumption of alcohol during Ramadan.)

Exit from the northeast corner, go one block east and cut diagonally across Molokan Garden – one of dozens of parks – to Uzeyir Hajibeyov Street. Call in at the shiny new tourist office, four blocks along, if you want ideas on exploring Azerbaijan more widely, or just continue another block to the monumental Government House – better known back in the USSR as the Dom Soviet.

The “Russian linesman” who awarded England their controversial third goal in the 1966 World Cup final against West Germany was, in fact, Azerbaijani. Tofiq Bahramov has had the Lenin Stadium renamed after him. It is close to the sweeping curves of the Heydar Aliyev Cultural Centre – named, like the airport, after the former president. (His son is now in control.) But the Europa League final is taking place further northeast at the vast Olympic Stadium. 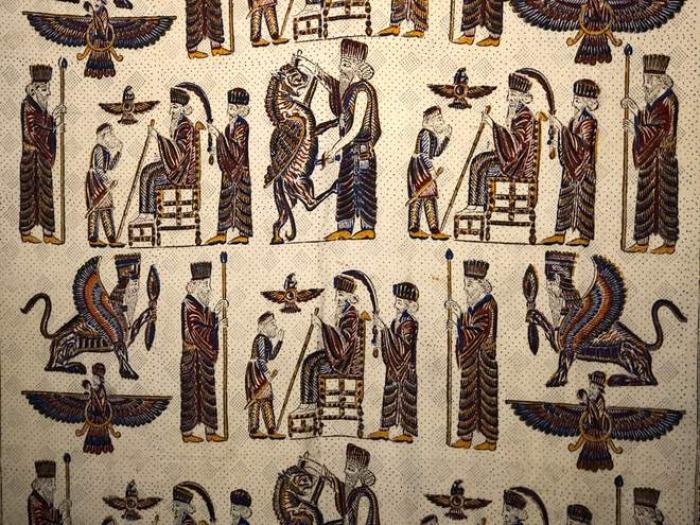 Take bus 184, passing dozens of nodding wells in the Suraxani oil fields, to the end of the route. You arrive almost at the Fire Temple, with an eternal flame in the hearth at the centre. The courtyard was created by rich Indian merchants on the site of a Zoroastrian place of worship. If it is lunchtime, ignore the tourist restaurants in the complex in favour of the Nafis Dad, just along the road overlooking a shady square.

About 15 minutes away by taxi (pay no more than 10 manats/£5) is a 20th-century curiosity, Yanar Dag – where natural gas burns constantly. Amusingly, it was ignited in 1950 when a careless shepherd dropped a cigarette that was still alight. So popular is it that, for 2019, it has been turned into a fully fledged tourist attraction complete with viewing area.

Guided Azerbaijan offers a range of bespoke tours with English-speaking guides that can cover all these sights as well as the “mud volcanoes” and petroglyphs south of the city. I paid $140 (£110) for a day’s tour.

Thanks to Azerbaijan’s oil wealth, there are plenty of shiny new upscale hotels. But the ideal location is within the walls of the Old City – besides characterful lodgings, you will also find some tranquillity from the always-buzzing traffic outside.

The pick is the Shah Palace, a boutique hotel arranged around a peaceful courtyard. Rates rarely exceed 200 manats for a double without breakfast; pay with cash to avoid a swingeing credit-card surcharge. 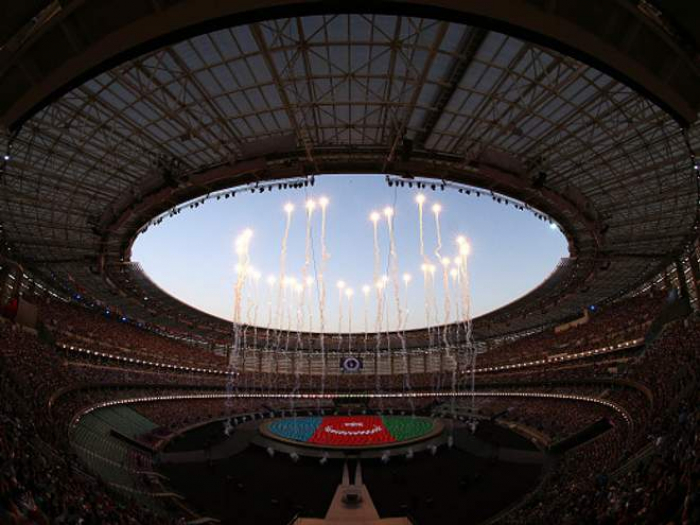 The Olympic Stadium will host the Europa League final (Getty)

The Museum Inn is smaller and less indulgent, but also excellent value at 150 manats or less for a double room.

Budget accommodation is rarer, but – as with the World Cup in Russia in 2018 – many Baku citizens are likely to rent out rooms at reasonably modest rates to football fans.

To be amazed by the wealth of some in this oil city, head for Port Baku – a glittering new collection of designer boutiques with all the familiar upmarket brands. Next door the Emporium Mall does much the same, but also includes Bentley and Ferrari showrooms. 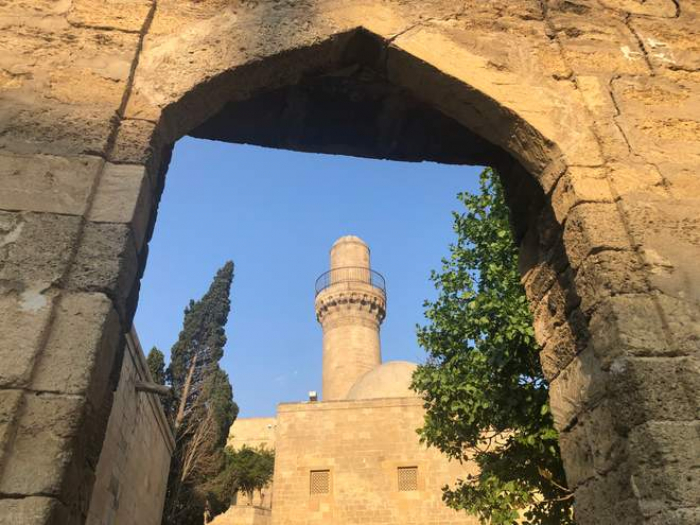 Palace of the Shirvanshahs (Simon Calder)

Even on the drive in from the airport, look out on the right for what looks like a stack of Rubik’s Cubes, which is the almost-completed tax office, and shortly afterwards a glass and steel building in the shape of a teardrop – the water utility HQ.

But the most dramatic structures are the Flame Towers, a trio of luminescent turquoise towers that sparkle in daylight and are transformed after dark by a dazzle of lighting. Beneath them, the finishing touches are being made to the Caspian Waterfront building, resembling a blossoming flower, that was supposedly inspired by the Sydney Opera House.

Will I need a visa?

Yes, but fortunately it is far easier and cheaper to obtain now than it has been for a century. Apply on the Asan Visa website, and pay $21 for normal processing (officially three working days, but in practice 24 hours) or $50 for the three-hour express visa. The Foreign Office says: “If you’re applying for an e-visa to come to Azerbaijan for the Europa League final on 29 May 2019, please note in the ‘Purpose of visit’ of your e-visa application you should select ‘Europa League Final’.” But it probably doesn’t matter if you just put “tourism”.

What currency do I need?

The manat, confusingly sometimes represented as AZN in quoted prices. The rate is about £1 = 2.15 manats. Change a few on arrival at the airport (the rate will be poor) and then more at one of the many bureaux de change in town.

Cards are widely accepted, though sometimes a steep surcharge is added.

What language do they speak?

Azerbaijani, which is closely related to Turkish. The most common foreign language among older folk is Russian, and among younger people English.

In fancier restaurants, it is normal to leave a few manats, but hardly anyone tips as much as 10 per cent. If you never tip, no one will particularly mind.

From the airport, the cheapest option is to get the Airport Express bus, which leaves every half hour (less frequently between 7pm and 6am) for a fare of 1.50 manats (buy a ticket using cash from the machines on either side of the exit from arrivals).

The Metro underground railway is limited, but – for a largely Soviet system – efficient and reliable. The most useful stations are Icarishahar, on the southwest edge of the Old City, and the stop called 28 May – which is actually at Baku railway station.

To use the system, spend 5 manats on a BakuCard from one of the machines. This entitles you to four rides, and can be topped up as you need.

Baku’s oldest Shia mosque, Bibi Heybet, survived at its clifftop location south of the city centre from the 13th century to the 20th – when it was demolished to make room for a new highway winding south from the city. A replacement was completed in 1998.

You are free to wander in and around the mosque (shoes off, wraps provided for some to cover their heads and arms) to appreciate the impressive dome. Afterwards, take in the superb view of the Caspian shore from the mirador.