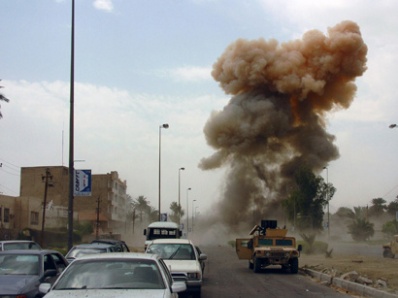 "The recent attacks have been carried out by terrorist groups pursuing illegitimate political goals," the Iranian foreign ministry spokesman said.

Araqchi also cautioned that security upheavals in Iraq are part of a "dangerous plot by the international hegemony" to fan the flames of sectarian divide in Islamic countries.
The Iranian foreign ministry spokesman urged all Muslim countries and nations to fulfill their historic responsibility in countering this plot.

Iraq is witnessing its worst bloodshed since 2008 and security forces are a prime target of the violence.

Seventeen car bombs exploded in Iraq on Monday, killing at least 57 people in predominantly Shiite areas in some of the deadliest violence since Sunni insurgents, including Al-Qaeda, stepped up attacks this year.

Police and medical sources said the attacks, which appeared to be coordinated, were concentrated on towns and cities in Iraqs predominantly Shiite South, and districts of the capital where Shiites reside, Reuters reported.

At least 10 people were killed when two car bombs blew up near a bus station in the city of Kut, 150 km (95 miles) Southeast of the capital, police said.

Four more were killed in a blast in the town of Mahmoudiya, about 30 km (20 miles) South of Baghdad, and two bombs in Samawa, further South, killed two.

The rest of the bombings took place in regions of Baghdad, in Sadr city, Habibiya, Hurriya, Bayaa, Ur, Shurta, Kadhimiya, Risala, Tobchi and Abu Dsheer neighborhoods.
In July, more than 810 people were killed in militant attacks.