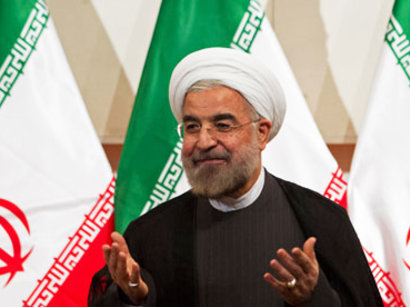 The talks between Iran and the P5+1 have not faced failure, Iranian president Hassan Rouhani said in presence of media outlets, Press TV reported live.
This is the first official press conference of Hassan Rouhani, since he was elected and inaugurated as the new president of Iran.

Rouhani noted that "We will have serious and strong negotiations with the P5+1 group", adding that Iran will determine a negotiating team and the talks with P5+1 will continue.

The U.S. and its Western allies suspect Iran of developing a nuclear weapon - something that Iran denies. The Islamic Republic has on numerous occasions stated that it does not seek to develop nuclear weapons, using nuclear energy for medical researches instead.

In 2012, representatives of P5+1 group and Iran held three rounds of talks in Istanbul (April 14), Baghdad (May 23-24) and Moscow (June18-19). None of these meetings resulted in breakthroughs on disputed nuclear issues. Previously talks between the "Six Powers" and Iran were not conducted for over a year.

The IAEA, whose mission is to prevent the spread of nuclear weapons, has been trying to negotiate a so-called structured approach with Iran giving the inspectors access to sites, officials and documents for their long-stalled inquiry.

World powers are monitoring the IAEA-Iran talks for any signs as to whether Tehran, facing intensifying sanctions pressure, may be prepared to finally start tackling mounting international concerns about its nuclear activity.